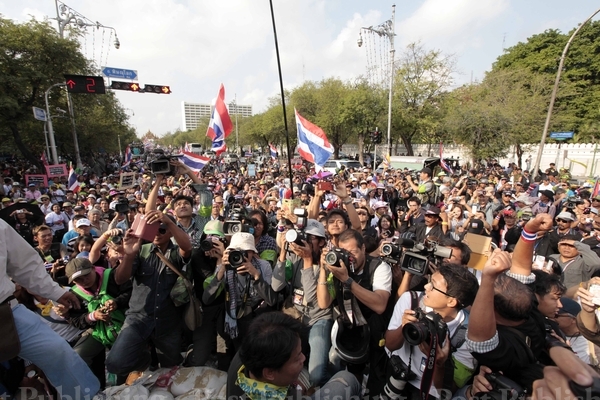 PDRC leader Suthep Thaugsuban led a march of thousands of demonstrators, mainly from the stage at  Pathumwan intersection, to Ratchadamnoen Nok Avenue and from Makkhawan Rangsan Bridge to Miksakawan intersection around 9am. Some protesters had already moved into the area near the Education Ministry on  Sunday night to await the main group. 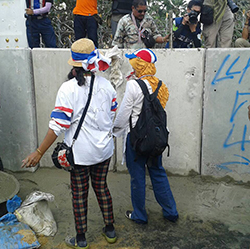 Protesters use concrete barriers to block an entrance of Government House. (Photo by Patsara Jikkham)

They are reinforcing the rally by the Network of Students and People for Reform of Thailand, which controls the Chamaimaruchet Bridge protest base on Phitsanulok Road, in  preventing Ms Yingluck from re-entering Government House.

''Yingluck Shinawatra will have no chance to return to Government House in this life or the next,'' said Mr Suthep shortly after reaching the area and appearing on a makeshift stage set up nearby.

The PDRC move came after the announcement by Chalerm Yubamrung, chief of the Centre for Maintaining Peace and Order (CMPO), that the area around Government House would be cleared for Ms Yingluck's return by Wednesday.

Ms Yingluck said on Friday that she would  go back to Government House only after security and access was guaranteed for her and the officials working there.

Mr Suthep also dared the CMPO chief to take back the occupied area from the protesters. "I challenge Chalerm to reclaim the area,'' he said.

The protesters used concrete barriers to block some front and rear entrances of Government House.

Ms Yingluck has been using the Royal Air Force head office at Don Mueang air base, the Army Club on Vibhavadi Rangsit Road and the Defence Ministry's office of the permanent secretary in Muang Thong Thani for cabinet and security meetings.