Imprisoned in their ‘palace’
Thailand
Politics

Imprisoned in their ‘palace’

The shackling of the CMPO doesn’t mean the protest leaders can relax their guard - Masked and camouflaged, the armed - Even Suthep’s brother-in-law cannot convince him to start talks to end the crisis

The Civil Court ruling that bans the caretaker administration from using the state of emergency decree to break up the anti-government protest is a blessing for rally-goers and protest leaders who face arrest warrants for defying the special legal requirements. 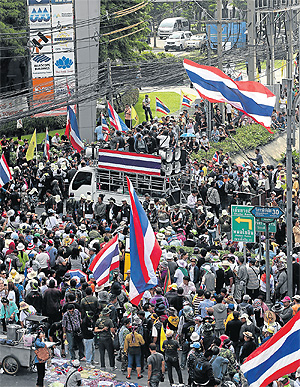 But for many core leaders of the People’s Democratic Reform Committee (PDRC) facing other charges that range from insurrection to blocking the Feb 2 election, the court order is not exactly good news.

It means their cat-and-mouse game with law enforcement authorities is still on.

After the caretaker government decided to declare a state of emergency under the decree in Bangkok and neighbouring provinces in late January, the public began to see intense action from security forces.

PDRC secretary-general Suthep Thaugsuban has repeatedly told protesters to be extremely careful, especially those who are high on the police wanted list – Anchalee Paireerak, Sathit Wongnongtoey and Chumpol Julsai, in particular.

The security for Mr Suthep is extra-tight when he has to leave the protest site to undertake other campaign activities.

Whenever Mr Suthep spends a night at the protest venue, he is surrounded by at least three layers of security guards. The number of guards is said to be around 100 at any given time.

Mr Suthep himself has been told by phuyai not to let his guard down and if possible stay among the crowd as they can keep him from being arrested or ambushed.

A small lapse in security could wound the protest leaders in the same way as the capture of Sonthiyan Chuenruthainaitham, the first core PDRC member to fall into the hands of the police. He was taken at the Central Plaza shopping mall in Bangkok on Feb 10. However, Mr Sonthiyan was freed on bail after seven days in police custody.

So to reduce the chance of arrest, several of the protest leaders have decided to make the protest sites their home.

Issara Somchai, who was assigned to supervise the Lat Phrao protest site before it was moved and merged with the Lumpini rally venue, is among the protest leaders who have not set foot in their home provinces since the protest intensified.

Mr Issara, from Ubon Ratchathani, is said to be the only protest leader who never spends a night anywhere else except in a makeshift tent at one of the protest venues.

Mr Chumpol, a former MP for Chumphon, has not visited his home province in weeks. He has made the Ratchaprasong rally site his home away from home and become a darling of the crowds. The rally-goers seem to be more drawn to him than celebrities taking the Ratchaprasong stage.

The protest sites are also where families hang out and spend time together.
Natthapol Teepsuwan and his wife Taya are often seen with their children around the protest venues. Mr Natthapol cannot seek shelter in a hotel owned by his family while the authorities are out to get him for defying the emergency decree.

Nutsaba Punnakan, wife of former Democrat Party MP Phuttiphong, brings their children to the protest site when they want to see their father.

Like the demonstrators, the protest leaders get their food from the protest site’s kitchens. If they feel a need to exercise, they can do so in a specially-designated area with a security cordon around it.

Who the unidentified forces are protecting the anti-government protesters of late is anyone’s guess.

Some groups, including the protesters themselves, believe the armed forces are secretly providing protection for the People’s Democratic Reform Committee (PDRC).

The theory holds that these so-called "popcorn warriors" are soldiers safeguarding protesters from "foreign forces" or "men in black" who clashed with soldiers during the 2010 violence and may have come back again to target the protesters.

But if the popcorn warriors are soldiers, the question remains as to whether they are offering protection of their own volition or have been ordered to do so by their superiors.
PDRC leader Suthep Thaugsuban insists the unidentified forces are not PDRC security guards.

Unidentified gunmen first stepped into the frame on Nov 30 last year when they reportedly exchanged gunfire with red-shirt attackers during clashes at Ramkhamhaeng University.

The name "popcorn warriors" began to be bandied about, particularly on social media, after clashes at Laksi intersection on the eve of the Feb 2 election, when unknown gunmen appeared out of nowhere to protect the protesters. The term evolved after a hooded man was photographed firing a gun concealed in a cornseed bag at red-shirt supporters.

The "popcorn warriors" were thought to have returned on Tuesday when riot police launched an operation to disperse protesters at Phan Fa Bridge on Ratchadamnoen Avenue. This time, there may have been several of the unidentified gunmen.

Their presence turned the tide of the battle against the police, who became targets themselves. Subsequently the police were forced to stop their dispersal operation and retreat. Four protesters and a policeman were killed during the clash and 71 people were injured, many seriously.

Four to five unidentified men also released PDRC co-leader Somkiat Pongpaibul from police captivity at the protest dispersal scene as he was being held in a police wagon near Phan Fa Bridge.

Their exploits have drawn praise and admiration from the protesters.

Meanwhile, some members of the red-shirts and the government also believe the unidentified gunmen are soldiers.

While army chief Prayuth Chan-ocha has maintained his neutrality during the political conflict, he has bluntly spoken out against hard-core red-shirt supporters such as Ko Tee, or Wutthipong Kotchathammakhun, who accused the military of trying to hunt him down and assassinate him.

It should be noted that Gen Prayuth also sent a company of troops from the Burapha Phayak regiment at the 2nd Infantry Division of the King’s Guard based in Prachin Buri to maintain order at Phan Fa Bridge following the deadly clash.

Also, the army recently told its legal experts to look into the possibility of taking action against Thammasat University history lecturer Somsak Jeamthirasakul for allegedly posting inappropriate messages about the monarchy on Facebook. The academic’s house was recently hit by gunshots.

An exercise in futility

Optimism is fading that the government and the protesters will sit down and thrash out their differences to break the stalemate which has severely disrupted the country for months.

It has been reported, but not verified, that an attempt has been made to launch negotiations.

As many lose hope of resolving the political crisis through dialogue, Niphon Promphan, a former Democrat Party leader, thinks that talks can ease tension and prevent bloodshed. The brother-in-law of the anti-government People’s Democratic Reform Committee (PDRC) chief Suthep Thaugsuban, Mr Niphon describes himself as a pacifist and says peace can win the day if given a chance.

He has been disturbed by the growing fatalities and injuries from clashes between the protesters and police in recent weeks. He is also concerned that there is no sign of the violence abating. 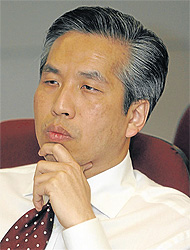 Niphon: Ready to be a go-between

Mr Niphon says people in many sectors of society have thrashed out ways of breaking the political deadlock. One of the solutions is the installation of a non-political, neutral government to replace the present caretaker administration to make national reform a reality before holding a general election. However, the proposal has proved immensely unpopular with government supporters and is fraught with complex legal challenges.

Mr Niphon said he was ready be a messenger or a go-between in any talks if they can be arranged.

He accumulated much experience in brokering peace during the political unrest of 2009-2010 when red shirts amassed in Bangkok in protests against the Democrat-led Abhisit Vejjajiva government.

Mr Niphon represented the government in discussions aimed at reaching a truce. The red shirts’ side was headed by Yingluck Shinawatra, the sister of ousted premier Thaksin Shinawatra.

He and Ms Yingluck were close acquaintances throughout the frequent talks they held during the course of the red-shirt rallies.

Earlier, Mr Suthep admitted he had had face-to-face talks with the premier in the presence of the armed forces commanders when the main anti-government protest rally was based at Democracy Monument. However, the session ended in futility as both sides stood firm on their terms that left no room for compromise.

There has since been no meeting between the two sides, although media reports claim talks have been going on behind the scenes attended by senior figures from all sides of the political divide.

They had gone there to sound out what the PDRC’s demands were and whether they could provide any conceivable basis for talks with the government.

Opponents have accused the PDRC of slamming shut its door on negotiations which could have averted the human cost in the conflict. The PDRC insists it is not prepared to accept a “middle path” that would keep the government it accuses of massive corruption in power.