The red-shirt United Front for Democracy Against Dictatorship (UDD) launched a mass counter-rally against the anti-government People’s Democratic Reform Committee (PDRC) on Saturday, aimed at mobilising supporters in the Northeast and the North. 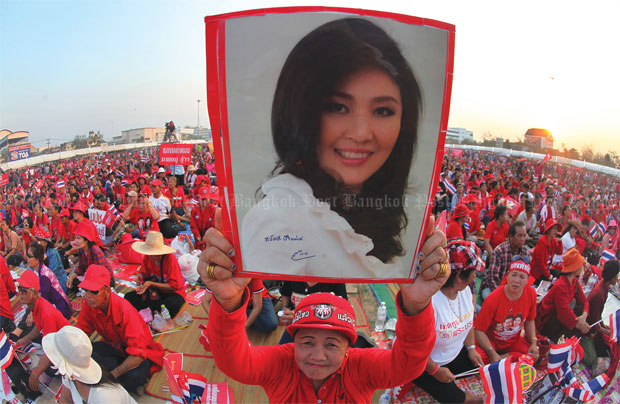 BEATING THE DRUM: A red-shirt demonstrator holds a placard of caretaker Prime Minister Yingluck Shinawatra during the pro-government United Front for Democracy against Dictatorship’s rally yesterday at Thung Sri Muang in Udon Thani. The red shirts are staging their so-called ‘war drum’ campaign to counter the anti-government rallies of the PDRC.

Ms Tida said the Udon Thani rally aimed to mobilise at least 50,000 supporters to kick off the campaign against the PDRC.

It is expected more than 20,000 people would join the rally on Sunday. Next week, a northern campaign will launch in Chiang Mai. Other moves would be detailed later, Ms Tida said.

“This campaign is our big rehearsal before we meet those in Bangkok who do not love democracy,” she said.

“It is possible that we will move to Bangkok, but when we do this depends on the situation,” Ms Tida said, adding that the PDRC’s efforts to push out the Pheu Thai-led government of Yingluck Shinawatra had angered red shirts.

The UDD chairwoman accepted that some red-shirt groups were talking about separating Thailand because of the deeply entrenched divisions in the country.

However, she insisted that UDD leaders did not agree with this idea.

“Why would we want to separate? We are the majority of this country,” she said.

UDD co-leader and former Pheu Thai MP Worachai Hema said today would be the largest-ever gathering of red shirts. He said a 20km-long “caravan” would move across the provinces to mobilise people to join the campaign.

This would show that the red shirts were ready to counter Suthep Thaugsuban, the PDRC leader, who wanted to topple the democratically elected government.

He said the red shirts would definitely move into Bangkok if it appeared the caretaker government was about to be toppled by undemocratic means.

Meanwhile, red-shirt leader Suporn Atthawong on Saturday kicked off a campaign to recruit “warriors” to defend democracy and fight for righteousness and justice.

Speaking from Maha Sarakham, where the campaign was launched, Mr Suporn said about 5,000 people were expected to sign up for what he called the Democracy Protection Volunteers Group (DPVG) in the province.

Mr Suporn is the president of the DPVG.

He said the movement expected to draw at least 600,000 volunteers from across the country, with 200,000 coming from the northeastern region.

The aim of the movement was to defend the democratic system and protect the constitutional monarchy, he said.

Mr Suporn said the volunteer recruitment in other northeastern provinces would start next Saturday. He will preside over the application process in Nakhon Ratchasima, where he expects 20,000 people to join.

Those eligible to apply must be at least 18 years old and the recruits will receive training from retired army personnel, he said.

Anuwat Tinnarat, a core red-shirt member, said that the movement was aimed at countering a potential military coup and to protect government agencies and the public against any form of dictatorship.