PDRC to renew Shinawatra targeting from new base
Thailand
Politics

PDRC to renew Shinawatra targeting from new base 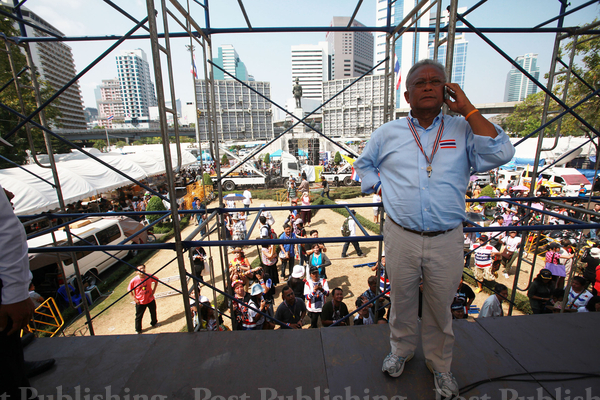 Demonstrators under the People's Democratic Reform Committee (PDRC) packed their bags and other necessities and moved from the Pathumwan, Ratchaprasong and Asok stages to join other protesters at Lumpini Park, now designated as the main base for Suthep Thaugsuban and other leaders to fight the caretaker government and uproot the influence of Thaksin.

Mr Suthep said at Lumpini shortly after leading other demonstrators from Pathumwan to the park that the closure of the three sites did not mean the PDRC was throwing in the towel. The strategy has been adjusted to fight Ms Yingluck, and businesses related to her family will continue to be a target starting on Monday, he added. 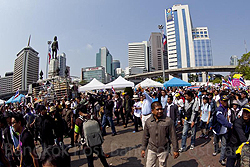 Other PDRC co-leaders sent the same message on Saturday night that the change will result in a better planned fight with a better focus to unseat the caretaker prime minister and push for reforms.

The Shutdown campaign began on Jan 13 with stages set up across Bangkok. Now there are three other stages besides the one at Lumpini.

Luang Pu Buddha Issara insists on staying put on Chaeng Watthana Road instead of moving to Lumpini. The State Enterprise Labour Relations Confederation still camps out at the Interior Ministry and the Network of Students and People's for Reform of Thailand controls the area near Government House at Chamai Maruchet Bridge.

The PDRC's change of tactics has prompted the army to adjust its plan to provide protection for more demonstrators at Lumpini.

Army chief Gen Prayuth Chan-ocha will call a meeting with other military leaders, including Lt Gen Theerachai Nakawanich, commander of Army Region 1, to map out a new plan.

''We increased checkpoints only on Feb 25. But when other stages are closed, we will have to adjust military protection plans accordingly,'' Maj Gen Wara Bunnyasit, chief of the army operation, said on Sunday. 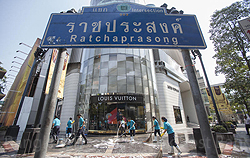 The army will seek permission from owners of all high-rise buildings around Lumpini to allow soldiers to be stationed on top in line with the army chief's order, said Gen Wara, who is commander of the 1st Division, King's Guard. The army's positions are to prevent unidentified armed men from attacking protesters from high ground, he added.

The army has deployed 56 battalions in 176 locations in Bangkok and other areas close to the anti-government stages.

The Bangkok Metropolitan Administration sent 3,000 workers to join protesters in cleaning-up the abandoned rally sites as other PDRC members were dismantling their stages.