Naval Special Warfare Command (Seal) commander Winai Klom-in is expected to be shifted from his job in the upcoming mid-year military reshuffle, according to a navy source. 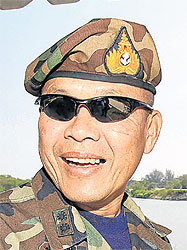 Navy chief Adm Narong Pipattanasai has proposed the removal of Rear Adm Winai as Seal commander, but has suggested promoting him to the rank of vice admiral, the source said.

Rear Adm Winai has been in the spotlight following his frequent comments about anti-government rallies, fuelling criticism he was taking sides with the People's Democratic Reform Committee (PDRC) protest group.

The arrest of several Seal and ex-Seal officers mingling with the protesters over the past few months has also raised public queries over Rear Adm Winai's allegiances.

The arrested Seal officers were suspected of working as protest guards, but Rear Adm Winai has repeatedly denied having any involvement with the PDRC.

The source said the navy chief's proposal to transfer Rear Adm Winai would end speculation over the Seal chief's relationship with the PDRC.

Adm Narong also believed the time is right for the change as Rear Adm Winai has served as Seal commander for three years and is due to retire next year, and therefore deserved to be promoted to vice admiral, the source said.

The Seal arrests were one of the topics discussed during a closed-door meeting between caretaker Prime Minister Yingluck Shinawatra and Adm Narong on Wednesday, the source added. During the meeting, Adm Narong "apologised" to Ms Yingluck for any troubles the Seals had caused. "The navy chief told Ms Yingluck that he would look into the matter and try his best to solve the problems," the source said.

Ms Yingluck will meet armed forces chiefs on Friday to review the final draft of the mid-year military line-up, the source said. Once approved by the premier, the line-up will be forwarded to the Election Commission, before it is submitted to His Majesty the King for endorsement.