Army chief Gen Prayuth Chan-ocha has little time for the red shirts, saying they are people without honour. 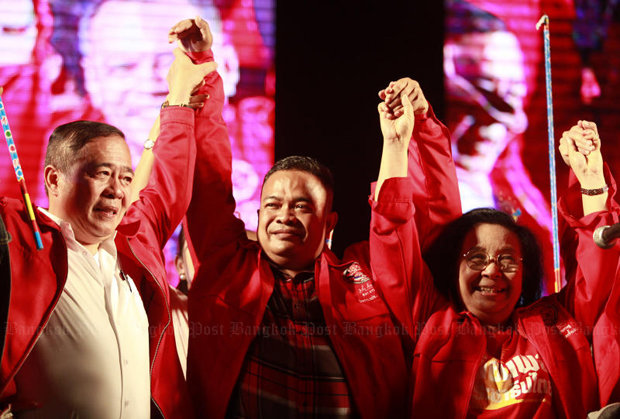 The red-shirt United Front for Democracy against Dictatorship (UDD) has appointed a perceived hardliner, Jatuporn Prompan, as chairman, amid claims the group is gearing up for a fight against anti-government protesters in Bangkok.

Mr Jatuporn, a former Pheu Thai Party MP, is facing terrorism charges in an ongoing trial related to the 2010 uprising.

While at the same time promising a big battle, he insisted on Monday that any new red-shirt tactics would be "peaceful". 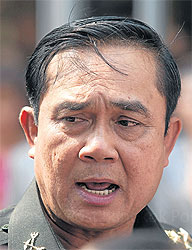 Prayuth: Leaders not worth following

"We have to discuss our strategy," Mr Jatuporn said at the weekend. But the next battle will be big."

Some red shirts believe the army has aligned itself with the protesters, which has raised the hackles of the army chief.

Asked if it was possible for him to negotiate with UDD leaders, Gen Prayuth said they had no honour. “I would like to ask if this group of people can be accepted as our leaders. A leader must have honour that is not self-proclaimed but given by others.

"If they continue to use evil means and speak intolerably rudely, will you let such people be important persons? It is as if we honoured them as leaders. Thais must be more enlightened,” the army chief said.

“I do not see any importance in these people. I am not interested as to whether they have strategies or not. It is a question of whether someone violates the law. I wonder how many cases of the UDD there are in court and if they are being released on bail,” the army chief said.

Gen Prayuth said some Thais were encouraging compatriots to clash with one another. He said he would prosecute people found to be instigating hatred, violence and defiance against authorities. "If anyone uses force against soldiers, I will use force too,” Gen Prayuth warned.

Amid reports the government may stop imposing the hardline executive decree on public administration in emergency situations and apply the softer Internal Security Act instead, Gen Prayuth said soldiers will still be deployed to maintain order as a backup to the police.

He said the presence of 176 military checkpoints had failed to stop attacks, so people who use war weapons at protest sites must be tackled.

He dismissed a report that Privy Council chairman Gen Prem Tinsulanonda was trying to send him a signal when he asked Gen Prayuth to read a message left at the base of a statue of late army chief Gen Kris Sivara in Sakon Nakhon province.

The message said ''Soldiers stand in the highest honour in which Thais can pin their last hope”. Gen Prem unveiled the statue of Gen Kris last Friday.

Gen Prayuth said Gen Prem might only want him to see the statue to ensure it in its finished state.

Soldiers respect Gen Prem and if he had any special message for him, Gen Prem could talk to him directly.

"In 2006 they used a military coup. In 2007 and 2008 they used independent organisations like the Constitutional Court. Now they used a people's revolution led by Suthep but it did not succeed," the UDD leader said.