Nikhom forced to step aside

The National Anti-Corruption Commission (NACC) recommended on Wednesday that Senate Speaker Nikhom Wairatpanich be impeached for his role in the passage of the charter amendment draft on the composition of the Senate. 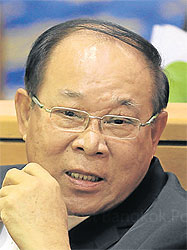 Nikhom: Must cease all duties immediately

The NACC ruling means that Mr Nikhom is required to cease carrying out all of his duties as Senate speaker. This has significant political implications, since the speaker of the upper house plays a crucial role in the selection of a new prime minister should the current one leave her post.

NACC member Prasart Pongsivapai said yesterday that the NACC unanimously decided that there were grounds to the allegations that Mr Nikhom has abused his authority in violation of sections 3 and 291, which could lead to him being removed as Senate speaker.

The NACC will forward its recommendation to launch impeachment proceedings against the Senate speaker as required by sections 273 and 274.

Mr Nikhom will have his role and duties as the Senate speaker suspended immediately following the NACC’s recommendation against him, Mr Prasart said.

Mr Prasart said the probe into former House Speaker Somsak Kiatsuranon for the same offence is still in progress as the case has many issues that are different from that of Mr Nikhom. There is a lot of evidence that still needs to be investigated, he said.

The next step will be for the Senate to consider impeachment with a vote of at least three-fifths of senators present at a meeting required for this to happen.

A political source noted that the suspension of Mr Nikhom from his duties has significant implications for the current state of politics.

When Mr Nikhom is suspended from his duty, the first Deputy Senate Speaker Surachai Liangboonlertchai will take over and he play a pivotal role.

An appointed senator and a legal expert, Mr Surachai is considered to be a very proud senator and does not cross the line of duty, compared with the elected Mr Nikhom, who appears aligned with the government, the source said.

In the event of a power vacuum, if Section 7 of the charter is invoked to appoint a non-partisan prime minister, Mr Surachai will play a crucial role in finding an interim neutral prime minister, the source said.

The NACC pressed charges against Mr Nikhom and Mr Somsak for their role in the passage of the charter amendment draft to make the Senate a fully elected body.

The charges are part of the impeachment process for alleged abuse of power. The two men are among 383 former MPs and senators who voted to pass the draft charter amendment seeking to change the make-up of the Senate.

The NACC’s probe began after the Constitution Court ruled on Nov 20 last year that the charter amendment on the composition of the Senate violated Section 68, which prohibits attempts to overthrow the democratic system of government with His Majesty the King as head of state.

Judges ruled by a vote of 5-4 that the amendment to make the Senate a fully elected chamber violated Section 68.

The court also voted 6-3 that the process adopted to pass the amendment was improper and violated Section 291.

According to the ruling, Mr Somsak and Mr Nikhom took it in turns to chair the debate during a joint session of both houses on the amendments and wrongly cut short the time allowed for the debate, denying some MPs the right to speak.

Speaking after learning of the NACC’s decision, Mr Nikhom said he was not surprised at the decision. He believed efforts had been made to impeach him based on the charter court’s ruling to create a power vacuum.

However, he said he has accepted the NACC’s decision and said that he had worked to the best of his ability as the Senate speaker.

Mr Nikhom said his deputy Mr Surachai will act on his behalf as Senate speaker.

Mr Nikhom added that impeachment proceedings must take place within 20 days of the NACC’s recommendation being forwarded to the Senate. By that time, the newly elected senators should take office to call a Senate meeting, although there might be some minor glitches.

Mr Surachai, the deputy Senate speaker, said yesterday he will need to study the scope of authority afforded to the acting role as the Senate speaker. Regarding the speculation about the appointment of a neutral prime minister, Mr Surachai said he was not sure if such an appointment is possible. He said he will need to study the legalities of the issue first.

Democrat Party leader Abhisit Vejjajiva said yesterday the NACC’s decision has underscored the need for the Senate to comply with the law.

However, Mr Abhisit expressed concern that if the Senate eventually decides that Mr Nikhom is not guilty, grave problems could ensue. He said this outcome could lead to those in power abusing the legislative procedure for their own benefit at the expense of the public benefit.