The political unrest is having an unusual impact on the next military reshuffle - Leaders of the anti-government protest are being eulogised in print - PDRC security men, under attack for unruly behaviour, are being brought into line

The unresolved political tensions are fuelling uncertainty over a host of critical issues, including the military reshuffle.

This year’s reshuffle is under intense scrutiny, with leaders of all three armed forces and the supreme commander going into mandatory retirement at the same time at the end of September.

Political insiders have been considering how the September shake-up will be effected if the current political unrest drags on until the middle of the year, when the reshuffle lists are considered.

Whether caretaker Prime Minister Yingluck Shinawatra hangs on until then, or a neutral prime minister replaces her, will undoubtedly have an impact on the outcome of the reshuffle.

A great deal of public interest is centred on the successor to army chief Prayuth Chan-ocha.

Two men are thought to be in the running for the post: deputy chief Udomdet Seetabut and assistant chief Paiboon Kumchaya.

Gen Udomdet may be a better fit as army chief if seniority is factored in. However, Gen Paiboon, who became a full general only last year, is thought to be more popular with anti-government protesters, a source in the army said.

The source added that the general has had a role in some classified missions connected to the protest.

Gen Paiboon is also well-trusted by Gen Prayuth as both belong to the Wong Thewan faction in the military which consists mostly of soldiers from powerful families. Gen Prayuth has allocated high-priority and classified tasks to Gen Paiboon.

Gen Paiboon is also believed to be on amicable terms with the Pheu Thai Party. Two years ago, a rumour spread widely that he flew overseas to see ousted premier Thaksin Shinawatra around the time it was speculated that he was being groomed to be 1st Army chief.

Gen Paiboon vehemently denied the rumour, insisting that he had never sought favour from anyone in his climb to the top.

In the meantime, the source said, resistance was building among the ranks of senior ammart (elite) officers against anyone succeeding Gen Prayuth who is from Class 14 of the Armed Forces Academies Preparatory School. The class counts Gen Udomdet as an alumnus.

However, Gen Udomdet is also a Queen’s Guard who progressed through the ranks alongside other big names such as former defence minister Prawit Wongsuwan, former army chief Anupong Paochinda and even Gen Prayuth.

The source said a black mark for Gen Udomdet could be the allegation that he has sided with Pheu Thai. At the same time, manoeuvring within the army is gaining impetus to push for Gen Paiboon to take over the army leadership as he is a classmate of Gen Prayuth’s younger brother, Lt Gen Preecha, who is the 3rd Army commander.

Lt Gen Preecha could also make the cut for one of the five most powerful posts in the army in the September reshuffle.

The protesters and opponents of the government have vowed to fight tooth and nail to ensure Ms Yingluck does not remain caretaker premier for much longer. That could see political violence escalating in the months to come and give observers more reason to keep up with developments in the military reshuffle. 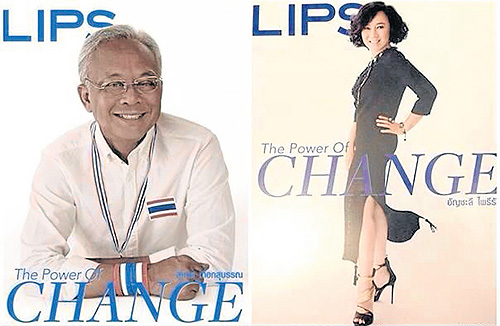 Cover boy and cover girl. Suthep and Anchalee show a lighter side after months of protest.

Behind the sweat and toil of keeping the anti-government protests on track is a surprising bit of "glamour" that is not usually associated with the harsh grind of politics.

The issue offers readers a choice of covers to choose from: one of Mr Suthep in white shirt with a whistle hanging around his neck, or one of Ms Anchalee who appears in an almost-ankle length black skirt with, of course, full make-up.
The cover, set in a white backdrop, is splashed with the words: "Power of Change".

The magazine has recorded unprecedented sales since the issue hit the newsstands. More than 200,000 issues have been sold, many of them to protesters.

A source familiar with the printing business said Lips normally sells between 30,000 and 50,000 copies per issue. Printing more than can be sold is a certain way of pushing production costs into the red.

However, the Suthep-Anchalee edition has been a hit with distributors who normally do not work with Lips asking for magazines to be supplied to them. Magazines normally have their own regular distributors and they do not normally obtain magazines from outside their distribution lines.

At the Lumpini Park protest site, queues stretching a few hundred metres were seen outside a tent where the magazines were quickly snapped up by protesters. People formed up in blistering afternoon heat and waited for several hours to buy the magazine, priced at 100 baht, and some even went over to have their copy autographed by Ms Anchalee herself.

The issue includes a collection of stories and pictures mostly about the protest leaders and their movement.

Lips editors and designers are part of the creative force behind the production of T-shirts and souvenirs sold at the rally sites. Like the magazine, T-shirts screened with PDRC hallmark motifs and livery have sold like hot cakes.

The proceeds are going towards helping to finance the protest which is costing millions of baht a day.

Most photos in the latest issue of Lips are in black and white, evoking a sense of “colourless” memories, Ms Anchalee said during her recent morning news talk programme broadcast from Lumpini Park.

British-educated, she is noted for her regular, late-night address to the protesters and her daily updates of the news about the PDRC in English.

Apart from his appearance in the magazine, Mr Suthep’s life will be chronicled in a pocket book to be released soon.

The pocket book will mainly focus on his work as a kamnan in tambon Tha Sathon in Phunphin district of his native Surat Thani province.

Earnings from the sale of the book will be wholly donated to an orphanage fund set up to care for children whose parents died in violent attacks during the protests.

Thaworn Senneam, a core member of the People’s Democratic Reform Committee (PDRC), has been handling legal disputes involving the group from the start.

To political observers, the man is at the top of his game and can take credit for a recent ruling by the Civil Court that bans the caretaker government from using the emergency decree to break up the protest.

While his skills as a lawyer have never been in doubt, it remains to be seen if he will fit the role of a protest guard supervisor as assigned by PDRC secretary-general Suthep Thaugsuban. 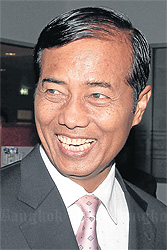 The PDRC leader was reportedly looking to improve supervision of protest guards who have been criticised for allegedly ending up on the wrong side of the law.

Mr Suthep had wanted to rein in the guard operation but did not have a chance until the recent consolidation of the protest venues.

After the rally sites were combined and moved into Lumpini Park, reports of protest guards’ rude behaviour towards park-goers became more frequent. Their image hit rock bottom following a recent assault case in which a man was allegedly beaten and thrown into the Bang Pakong River by some guards.

Mr Thaworn admits his new job is one of toughest challenges he has had to face.

The guards come from various backgrounds and from time to time fighting erupts among them as they become nervous. Many volunteer to work as guards out of genuine concern for the safety of the PDRC demonstrators.

“Regardless, the protest guards deserve understanding. They work under tremendous pressure. Some nights they do not sleep at all because of violent attacks,” he said.

Mr Thaworn launched into his new assignment by organising training sessions which were intended to tighten up rules of conduct to avoid further criticism. At the end of the training, the number of the guards dropped from 4,000 to 2,234 after a number of them either quit or were screened out.

He recently launched another training programme which includes first aid courses for the guards.

“It is normal for some to drop out because the training is intense and becomes more demanding,” he said.

According to Mr Thaworn, the PDRC guards are currently divided into two units.

The Kong Roi Nam Khing guards are deployed at various points of the rally to provide assistance and services to the demonstrators, especially the women.

The other unit comprises 1,000 male guards who are deployed at six main entrances and throughout Lumpini Park. These guards are paid a daily allowance of 500 baht for their services.

Mr Thaworn, however, is not handling the guards alone. He has Pol Lt Gen Somkid Boonthanom, a retired police officer, on his team. The ex-police officer commands respect from the protest guards.

According to Mr Thaworn, while Mr Suthep is deeply concerned about the safety of the protesters, he stresses the need to do what is necessary and appropriate.

“The protest guards must be unarmed. They must be polite with the protesters. They should do their job in a way that is appropriate. Those who can’t comply are free to leave,” Mr Thaworn said.