Assistant national police chief Ruangsak Charitek kicks off a campaign to regulate traffic in front of major shopping malls and markets. The event was held Monday outside CentralWorld Plaz on Ratchadamri Road, one of the areas tragetted by traffic police. (Photos by Somchai Poomlard)

Traffic police also intend to strictly enforce the law against drivers who stop or park vehicles so that they obtruct, block or impede traffic and cause traffic jams. Violators are subject to paying a fine of 500 baht .

The 10 target areas are roads in front of:

Police measures will continue along with the threat of towing vehicles, a new step taken recently to try to enforced laws and help to solve traffic problems in the capital.

Pol Lt Gen Ruangsak said the policy was initially implemented on 10 heavily congested spots and would expand to 45 other areas with similar traffic problems within the next three months. Improvements would be assessed after 15 days, he added. 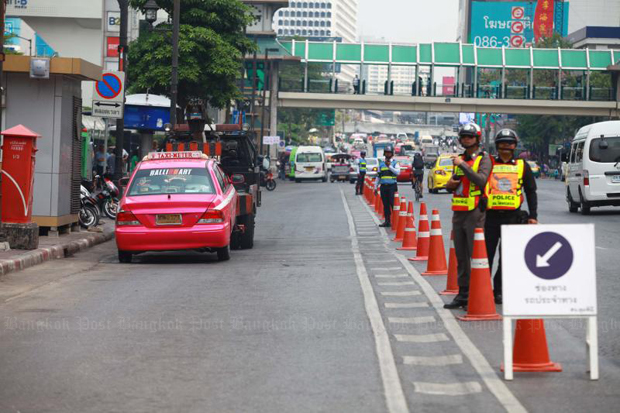 Taxi is towed as part of the campaign to relieve traffic jams. (Photo by Somchai Poomlard)