Caretaker premier Yingluck Shinawatra has ordered a revamp of rubbish management and waste-related laws to better control dump sites and landfills across the the country. 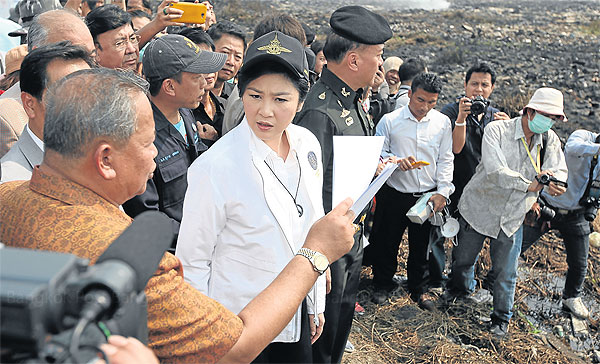 Caretaker Prime Minister Yingluck Shinawatra talks to an official as she inspects the fire-gutted rubbish dump in tambon Phraeksa of Samut Prakan’s Bang Phli district yesterday. The premier said the blaze is under control and the air quality in the area is now safe. PATTANAPONG HIRUNARD

"We need to better integrate the work of state agencies which are in charge of enforcing 12 laws relating to waste management. The Interior Ministry, provincial governors and local administrations should be the focal points in dealing with rubbish management," she said.

Ms Yingluck yesterday went to the fire-gutted rubbish dump in tambon Phraeksa in Samut Prakan's Muang district to inspect the situation there. She also chaired a meeting of relevant authorities about the environmental and health impacts of the landfills.

The blaze and related pollution problem were solved quickly due to the cooperation of agencies concerned, she said.

The fire at the dump was put out on Saturday night, after burning for six days.

Officials from the province, however, must work with the local administrators to work out plans to prevent such fires breaking out again, she said.

According to the prime minister, the Pollution Control Department has tested the air quality at the landfill and in nearby areas and it has returned to normal levels.

Despite the smell, the areas are regarded as safe, she said.

Samut Prakan governor Kanit Iamrahong said residents who were earlier evacuated due to the pollution caused by the blaze have now returned home.

“Our society has rarely taken serious legal action against polluters who must be held responsible for causing harm to the environment and people’s health,” said Ecological Alert and Recovery Thailand director Penchom Saetang.

Ms Penchom said her team inspected rubbish management sites in Samut Prakan province over the weekend and found at least two dumps were still being operated despite locals complaining about the bad smell and poor management.

“Illegal rubbish dumping is a large business which involves local mafia gangs and corruption that stops us from solving its problems.”

“Pollution makers must compensate for damages, and also carry out a clean-up process to heal the environment and people’s health,” she said.

The Industry Ministry, which directly enforces the law for industrial waste management, must inspect other garbage dumps to see if there is any hazardous industrial waste, she said.

Somnuek Jongmeewasin, an independent researcher on the environment and community services, said more industrial plants have emerged even though Thailand does not have enough waste-processing facilities.

More than 16,000 factories produce hazardous industrial waste, but the country has less than 20 legal waste processors.