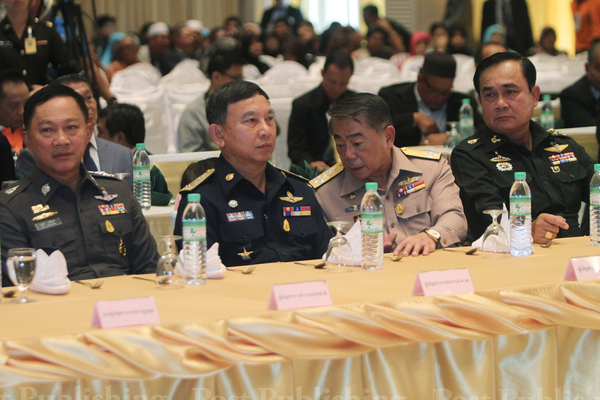 The issue was raised in talks between national police chief Adul Saengsingkaew and army commander-in-chief Prayuth Chan-ocha during sideline talks when they met at a project launch in the far South presided over by Privy Council president Prem Tinsulanonda. Gen Prem was not involved in the talks.

Pol Gen Adul promised he would take serious action against the two and direct immigration authorities across the country to watch out in case they try to flee the country.

Mr Ekaphop, who is wanted on an arrest warrant, is believed to have already fled the country.

Police placed importance on all lese majeste cases, he added.

Police looked to be under pressure from the caretaker government as well, as the issue was also tabled in talks of the Centre for the Administratin of Peace and Order (Capo) on Thursday.

Capo member Sirima Sunawin told a press conference that the centre was informed by police that an arrest warrant for Mr Wuthipong will be sought on Friday. Police were still preparing the case against him.

The Democrat Party called on the army chief to go after Ko Tee. The call was forwarded to Gen Prayuth through his aides on Thursday.

The Crime Suppression Division (CSD) was also urged to file charges against him and ensure his immediate capture.

"Gen Prayuth has made clear his position to see police take action on this case,'' deputy army spokesman Col Winthai Suwaree told FM101 radio station after a meeting between senior army officers and the Democrats.

Democrat deputy spokeswoman Malika Boonmeetrakul insisted in an interview with the radio programme that security authorities could arrest lese majeste suspects, citing a memorandum of understanding signed between the Information and Communications Technology Ministry, police and the armed forces when the Democrats governed the country.

Col Winthai said soldiers could arrest people only in areas under special laws, including martial law and the emergency decree.

Mr Wuthipong, leader of a red-shirt group in Pathum Thani, faces a prison term of three to 15 years if he is found guilty of lese majeste, and could also face another charge for violation of the Computer Crimes Act.

The lese majeste accusation arises from an interview with VICE.com News also posted on YouTube.

Capo's Mrs Sirima warned that the Computer Crimes Act lese majeste provision could also apply to people who forward the interview to other people.

The Democrats are dubious whether police will really go after Ko Tee, alleging he has close links to a senior police officer.

Meanwhile, his whereabouts are unknown.

Democrat lawyer Wirat Kanlayasiri stressed the police connection, claiming Ko Tee is under protection of a two-star police officer. Democrat spokesman Chavanond Intarakomalyasut claimed he had already slipped out of the country.

Ko Tee is also accused of leading red-shirt members in a bloody clash with People's Democratic Reform Committee members at Lak Si intersection on the eve of the Feb 2 election. He upset Gen Prayuth when he claimed that the army chief was plotting to take his life. The army chief strongly dismissed the accusation.

He has not shied away from being very publicly a red-shirt member and announced that his group is not under the United Front for Democracy against Dictatorship (UDD) umbrella.

UDD leader Jatuporn Prompan has also said Mr Wuthipong is on his own, saying he had never followed UDD directions.