Democrat Party leader Abhisit Vejjajiva has volunteered to spearhead efforts to break the current political deadlock by personally approaching key political figures to sell them on the ideas of reform.

His offer has already been met with mixed responses. 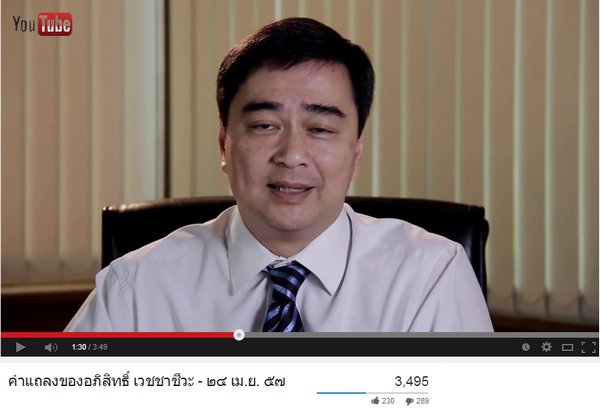 Mr Abhisit hits YouTube for a Thursday address: "All sides have to realize and accept is that there can be no clear-cut winners, nor losers."

Appearing in a three-minute video clip posted on YouTube Thursday, Mr Abhisit said the only way to solve the political problems and move the country towards progress and stability is reform.

"I believe that the only way forward for the country is through reform, undertaken constitutionally and democratically with elections an integral part of the process,” he said.

He did not elaborate on his reform ideas, saying he wanted to meet key individuals and groups to convince them in person. He will today meet permanent secretary for justice Kittipong Kittayarak and the Reform Now Group. On Monday, he will meet Supreme Commander Thanasak Patimaprakorn for talks. He also plans to meet the Election Commission, the government, other political parties, as well as leaders of protest groups.

Mr Abhisit expects to complete the series of meetings within seven days.

Mr Abhisit said he was realistic yet hopeful about his mission. Some groups responded positively to Mr Abhisit's approach, but the red shirts and the Pheu Thai Party poured scorn on it.

United Front for Democracy against Dictatorship chairman, Jatuporn Prompan, said Mr Abhisit's proposals are not based on democratic principles and will not help ease political conflict. His meetings will be futile if the People's Democratic Reform Committee (PDRC) will not allow the poll to proceed, Mr Jatuporn said.

''Mark [Mr Abhisit's nickname] doesn't need to meet anyone. He should find an answer by himself,'' he said.

Pheu Thai Party spokesman Prompong Nopparit lashed out at Mr Abhisit's proposals, saying they are a belated attempt after more than five months of protests by the PDRC. Mr Prompong also said Mr Abhisit should announce whether he will run in the fresh poll before going ahead with the meetings.

However, Mr Abhisit was adamant: "I am determined to help foster a reasonable solution to problems. What all sides have to realise and accept is that there can be no clear-cut winner or loser.

"I understand that my proposals cannot satisfy the wishes and demands of all sides, not even within the Democrat Party, or those seen to be on my side. But I believe that this is the correct direction in order for our country to move forward,'' he said.

Mr Abhisit also urged all Thais to be open-minded and to give him, reform and Thailand a chance.

He also voiced his frustration with current economic problems. He spoke of the rising cost of living and highlighted the fact that many farmers have still not received their payments for pledged rice. He also pointed out the adverse impacts corruption has on the economy.

However, he did not place the blame on any particular group. "Now is not the time to play the blame game because everyone is accountable for the situation our country is facing, including the Democrat Party and myself," he said.

A key Democrat Party figure said Mr Abhisit's planned meetings with representatives of all sectors of society are a middle-of-the-road approach that should be acceptable to all, because nobody will gain everything and nobody will lose everything. Mr Abhisit's proposed reforms will not be extreme ones that would allow "outsiders" or appointed persons to push for legal amendments.

Mr Abhisit's proposed reform process will comply with the legal, democratic and constitutional framework, the source said, adding that Mr Abhisit will detail his proposed solutions to all during his meetings with them.

Mr Abhisit will also take his proposals to caretaker Prime Minister Yingluck Shinawatra if she agrees to meet with him.

PDRC spokesman Akanat Promphan said yesterday the PDRC agrees with Mr Abhisit's proposal for reform and is willing to meet him to discuss solutions to the political problems.

Speaking on behalf of the Reform Now Network, Mr Kittipong said yesterday he and Mr Abhisit will meet today to exchange views.

Mr Kittipong said he will meet Mr Abhisit on behalf of the network, not as permanent secretary for justice. He said at least three of the network's groups will also attend the meeting.