Protesters of the anti-government People’s Democratic Reform Committee (PDRC) campaigned in Samsen area of Bangkok on Friday, hoping to persuade people to join their planned major rally on May 14. 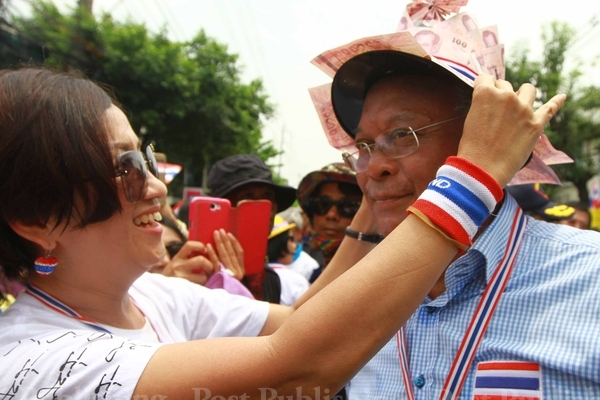 A supporter gives PDRC leader Suthep Thaugsuban a hat with 100-baht bills attached to it on Samsen Road, Bangkok, on Friday. (Photo by Somchai Poomlard)

PDRC secretary-general Suthep Thaugsuban led his followers along a five-kilometre route from Boon Rawd Brewery, through the Thewet area and the Bank of Thailand and Wat Tri Thotsathep.

They encouraged people join in the planned religious and prayer ceremonies on May 5 and 13, and a mass rally on May 14.

PDRC co-leader Thaworn Senniam said the street campaigns would continue until May 12, and the May 14 protest could be the last movement of PDRC because it considered  it had already done its best over  the past six months.

He declined to predict whether the PDRC can achieve its goal to oust the caretaker government of Yingluck Shinawatra, and ensure national reform before the next election.

Mr Thaworn said only that if  there is a general election on July 20, as the government and the Election Commission plan, there would be no change and Thai politics woud remain in conflict.

Mr Abhisit is on a campaign to discuss a political settlement with all parties and is expected to make public his proposal to break the political deadlock this Saturday.