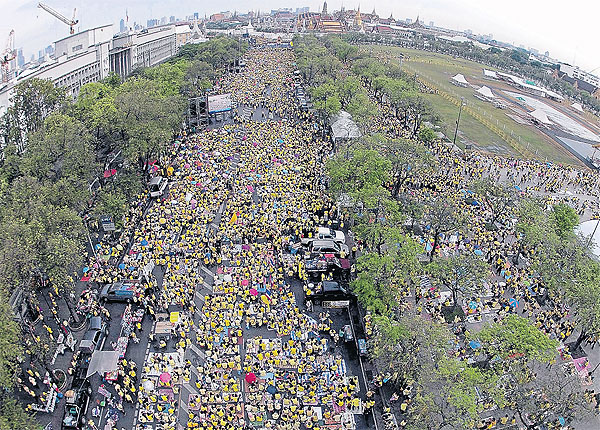 It is the latest in a long line of “last battle” pledges by the PDRC and its self-declared leader. According to the website Prachatai, Mr Suthep’s 10th such vow was made on April 30.

The group took the occasion of Coronation Day yesterday to kick off their new campaign.

Mr Suthep announced the PDRC’s three-step “final battle” push at Sanam Luang, before the Temple of the Emerald Buddha.

The first step was taking an oath to protect the monarchy and to eradicate the influence of the so-called “Thaksin regime”, referring to the influence of ousted prime minister Thaksin Shinawatra and his family on Thai politics.

The second step is scheduled for next Tuesday, on Visakha Bucha Day. On that day, the anti-government group will organise merit-making rites at Sanam Luang to “get rid of the evil and misfortunes afflicting the nation”.

In the third step, the PDRC will stage a rally next Tuesday to “reclaim sovereign power for the people” from the caretaker government. But Mr Suthep has yet to disclose details of how this will proceed.

On stage at Sanam Luang yesterday, Mr Suthep led supporters to light candles, offer their best wishes to the King and take an oath of allegiance.

“We, the great mass of the people, will cooperate to fight to the end against those plunderers of the nation and totally eradicate the Thaksin regime as well as change the country to an absolute democracy. We will also fight peacefully for reform before an election,”
Mr Suthep said.

Earlier in the day at 2.30pm, Mr Suthep had led his supporters to march from Lumpini Park to Sanam Luang.

Some heads of villages and village groups joined the PDRC march. Most demonstrators were wearing yellow.

The anti-government protesters marched along Rama IV Road and via Yaowarat, the Defence Ministry and the City Pillar before reaching Sanam Luang.

The group plans to go to Hua Hin next Friday in their campaign to return sovereign power to His Majesty the King.