One woman was killed and more than 20 people injured in Monday's 6.3-magnitude quake that shook northern Thailand, according to the Disaster Prevention and Mitigation Department. 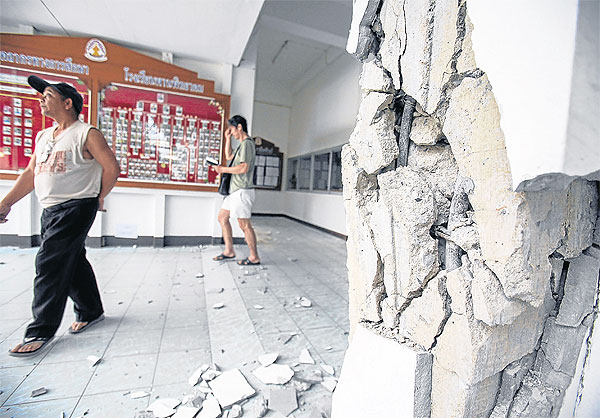 A man walks past a crumbling pillar at Phan Phittayakom School in Phan district of Chiang Rai. The school was damaged in Monday’s earthquake in the upper North. PATTARAPONG CHATPATTARASILL

An 83-year-old woman, Saeng Rinkham, was killed when the brick walls of her home fell on her during the quake in Chiang Rai's Mae Lao district.

At least 23 people were injured, mostly by items falling from shelves in their houses, Mr Chatchai said.

More than 100 aftershocks have been reported since the quake rattled the North at 6.08pm on Monday. Temples, hospitals, roads, houses and shopping malls were damaged, he added.

Mr Chatchai said the department has launched a 24-hour helpline No.1784 for people who need assistance.

The Fine Arts Department reported that two temples and 11 historic places in Chiang Mai, Chiang Rai and Phayao were damaged.

Meanwhile, the Public Health Ministry yesterday held a meeting chaired by its permanent secretary Narong Sahametapat to assess the damage to hospitals in the North.

Damage to two other hospitals — Chiang Rai's Prachanukroh Hospital and Mae Lao Hospital — was more severe, resulting in the transfer of patients.

Mae Lao Hospital suffered the worst damage when part of a building there subsided. However, the hospital is continuing to provide health care in a make-shift shelter, he said.

None of the hospitals have stopped providing services, said Dr Narong and they have adjusted either service location or transferred patients to other buildings to continue doing so.

“Whenever a disaster happens, there are always rumours linking it with superstitious beliefs, creating fear. So we want people to listen to only reliable information from authorities,” said Vachira Pengchan, deputy permanent secretary for health.

At least 18 companies of troops and another from the Disaster Relief Division were ready to assist quake victims.

Caretaker premier and Defence Minister Yingluck Shinawatra instructed the army to provide relief to those who need it.

Police spokesman Pol Maj Gen Piya Uthayo said a coordinating centre was set up at a police booth in Nong Gao Hong in Mae Lao district of Chiang Rai, about kilometre away from the area hardest hit by the earthquake.

Border patrol police have been been sent to Chiang Rai to help. They will distribute relief packages and inspect places in preparation for repairs, Pol Maj Gen Piya said.

Engineers and rescue teams will help remove debris and bring in repair equipment as soon as possible, he said.