Former prime minister Yingluck Shinawatra has denied she did anything wrong after the Constitutional Court ruled to remove her from office for abuse of authority.

She said in a television news report that during her tenure as prime minister she had worked hard and devoted herself to serving people, who had elected her government.

She insisted that she had worked honestly and had done anything dishonest as she was accused of doing. 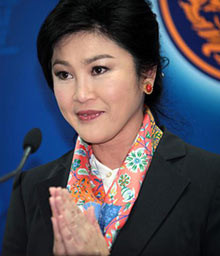 She thanked government officials for supporting the work of her government over the two years and nine months she was in office, and the people for their moral support.

She was proud to have been an elected and hard-working prime minister and remained committed to democracy, social equality and the public interest.

The Constitutional Court on Wednesday annulled the ministerial status of Ms Yingluck and nine other members of the caretaker cabinet who had attended the cabinet meeting on Sept 6, 2011, when Thawil Pliensri was removed as secretary-general of the National Security Council (NSC) and made an adviser to the prime minister.

The Constitutional Court found the transfer of Mr Thawil to be a breach of the civil service merit system and ruled Ms Yingluck’s team failed to prove that Mr Thawil's work was flawed enough to justify his removal from the important position of NSC secretary-general.

The other caretaker ministers in the Pheu Thai Party-led government remain in office.

Pheu Thai strategist Pokin Polakul told a press conference after the court ruling that the judgement was in contravention of Section 181 of the constitution.

Mr Pokin said there was a concerted move by a political party, the People’s Democratic Reform Committee (PDRC) and other organisations set up under the Constitution to overthrow democracy and the election system.

There had been other dishonest efforts to ruin former prime ministers —  including Samak Sundaravej, Somchai Wongsawat and Yingluck Shinawatra. They were leaders of the Pheu Thai Party and its disbanded predecessor People’s Power Party.

Such moves violated the constitution and amounted to a new form of coup, Mr Pokin said.

The opposition Democrat Party called for other cabinet members who remain in office to step down as caretaker ministers and deputy ministers as a way to express responsibility to society.

“Everyone should respect the Constitutional Court’s ruling and stop dragging the court into politics,” said party spokesman Chavanond Intarakomalyasut.