Ruling must be respected
Opinion

Ruling must be respected

The decision was unanimous. The Constitutional Court’s landmark ruling on Wednesday has set the standard for those in political office — transfers of senior officials cannot be unethical, unconstitutional and unlawful, especially when it is done for political benefit. 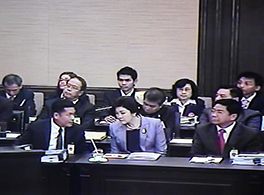 Editor's comment: The fact the judiciary is willing to hold top leaders accountable to the law, regardless of whether the law is right or wrong, is cause for celebration. (Photo by Thiti Wannamontha)

Citing the unusual haste in the decision and irregularities in the documentation used for the transfer of Thawil Pliensri as secretary-general of the National Security Council, the judges ruled that caretaker Prime Minister Yingluck Shinawatra and nine other cabinet ministers involved in approving the transfer are to be removed from office for abuse of power.

The judges’ message is simple: Break the law and face the consequences.

The fact the judiciary is willing to hold top leaders accountable to the law, regardless of whether the law is right or wrong, is cause for celebration.

And this should be the standard for all who appear before the law. If the law is not right, if it is silly or ridiculous, then change it, pure and simple.

No doubt, there will be those who will rejoice over the charter court’s ruling and feel vindicated, since Ms Yingluck is no longer prime minister.

Others will be disappointed and angry, arguing the ruling reinforces their belief that a coordinated judicial coup is under way.

But whether one likes or despises the court’s ruling, it must be respected, recognised and accepted as binding to the caretaker government, all political parties, government organisations and political groups.

There are no winners or losers in this ruling.

The country remains deeply divided. Thailand and its people continue to lose, as political stability and uncertainty remains.

The situation appears murkier than ever.

The United Front for Democracy against Dictatorship (UDD), the red shirts, are set to mobilise for a mass rally on Saturday while Suthep Thaugsuban’s People’s Democratic Reform Committee (PDRC) plans to step up their rallies for yet another “final” countdown.

If violent clashes result, then the ominous spectre of a military solution will emerge – and this is not an option for the country.

There is a growing segment of the population that is becoming increasingly bored, frustrated and distanced from both sides.

Support and respect for the political process is waning.

All the more reason for politicians — of all stripes — to do their jobs, which is to come to a compromise and settle the problems politically. All sides say reform is needed.

Then get in a room and agree on the details so the rest of the country can move forward.