Investors should not be fooled by the lack of an initial reaction, according to EM Quest Capital LLP and RMG Wealth Management LLP. Ms Yingluck's removal by the Constitutional Court stands to deepen political unrest that could weaken economic growth and trigger declines in the baht and local bonds.

"This is a clear short in my book," Phillip Blackwood, who oversees US$3.2 billion of emerging-market assets at EM Quest Capital, said in an e-mail on Wednesday. “There’s a political vacuum, risk to sovereign downgrade, low investments, and low growth is a clear negative for foreign-exchange." He said he is buying Thai credit default swaps while selling the baht. 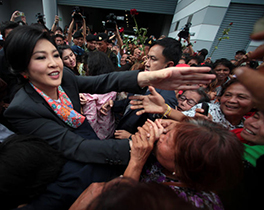 Former prime minister Yingluck Shinawatra is greeted by her supporters on Wednesday, May 7, 2014. (Photo by Chanat Katanyu)

Policy makers in Southeast Asia's second-largest economy reduced their 2014 growth estimate to 2.7% from 3% in March. The impact of monetary easing may be limited as political uncertainty weighs on economic expansion, according to minutes of an April 23 meeting in which they left the key rate unchanged at 2%.

Thailand's economy may contract in the first quarter from the previous three months amid unrest that began in late October to unseat Shinawatra, the central bank said last month.

The baht weakened 0.2% to 32.449 per dollar as of 8.38am in Bangkok, according to data compiled by Bloomberg. The Thai currency has declined 3% against the dollar in the past six months, the worst performance among the 12 most-traded Asian currencies tracked by Bloomberg.

The yield on the government’s three-year local currency notes was little changed at 2.38% on Wednesday and the SET index of equities closed down 0.1% at 1,402.61.

Thailand's caretaker government installed an acting prime minister to stave off collapse after a court removed Shinawatra, casting doubt on a general election planned for July and risking renewed protests.

Richardson said he is betting against the baht while buying India's currency, because Indian interest rates are on the rise and elections raise the prospect of positive fiscal reforms.

"India is building a little bit of credibility whereas Thailand is still very much in the slow lane, not gaining any credibility and at risk of losing credibility," Richardson said by phone from London on May 7.

Not everyone is bearish on Thai assets amid the turmoil. Peter Taylor, who helps oversee about $50 billion in emerging-market equities at Aberdeen Asset Managers Ltd, said he favours Thai equities over its currency and bonds because they are cheap.

"We are not blind to macro-political risks, but we are much more focused on company fundamentals and valuations," Taylor said at a meeting in New York on Wednesday. "Thailand has been a perennially good-value market, particularly in that small-cap space."

Richardson said the reaction to Shinawatra's ouster was muted in securities markets because investors in developing-nation assets are generally more optimistic than they were at the start of the year.

"Not to say Thailand’s a good place to be," he said. "The market's just fairly sanguine about a number of issues at the moment and not looking to push the downside on any particular themes."

Thailand is rated Baa1 by Moody's Investors Service, the third-lowest level of investment grade, and an equivalent BBB+ by Standard & Poor’s. India is ranked two steps lower at Baa3 and BBB-.

The Bank of Thailand (BOT) left its benchmark rate unchanged last month after cutting it to 2% in March, the lowest level since 2010.