The United Front for Democracy against Dictatorship (UDD) has urged red-shirt members and their allies to try to avoid actions that might trigger a coup and spoil its plan to hold a mass rally starting Saturday. 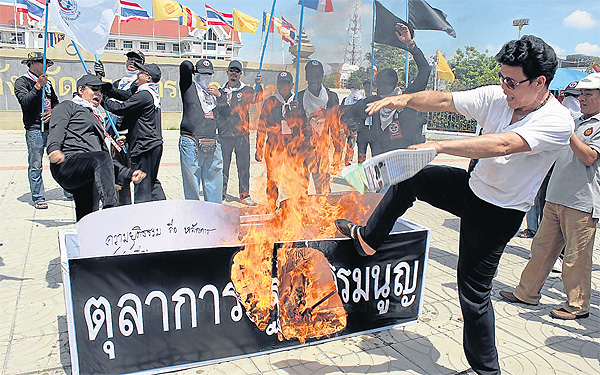 The red shirt splinter faction Volunteers Protecting Democracy Group burnt and kicked a mock coffin for the Constitutional Court judges outside the provincial hall in Ayutthaya Friday to protest the court's decision to oust Yingluck Shinawatra as prime minister. (Photo by Sunthorn Pongpao)

The warning came as the People's Democratic Reform Committee (PDRC) protesters kicked off their "final battle", laying siege to five state-run television channels and forcing the stations to agree to run more news about the PDRC, along with broadcasting news about the government.

Fears of violence were heightened when the pro-government People’s Radio for Democracy Group, led by Sornrak Malaithong, threatened to retake the protest venue on Chaeng Watthana Road from anti-government protesters.

UDD leader Jatuporn Prompan said the latest move by the PDRC was designed to lead to undemocratic change and the red shirts should not be provoked.

"The red shirts must stay out [of the protests] and be prepared. Don't break ranks and [don't] do anything that may create a reason for them [PDRC] to topple democracy. And for the independent red shirts, teamwork is important. A tiny mistake can ruin the whole thing," he said at a press conference at a shopping mall in the Lat Phrao area.

He also requested that red shirts who write messages on social media sites provoking anti-government protesters cease antagonising them for the sake of the safety of those who decide to join street protests.

He said the PDRC was desperate to bring in change after the rulings by the Constitutional Court and the National Anti-Corruption Commission against former prime minister Yingluck Shinawatra failed to create the power vacuum it wanted.

PDRC secretary-general Suthep Thaugsuban also wanted a new Senate speaker, expected to be elected at Friday's Senate meeting, to nominate a new prime minister, said Mr Jatuporn. However, such a plan could not proceed as quickly as Mr Suthep would like because a new speaker would not have full authority until royal endorsement is received, he said.

Mr Jatuporn asked the red shirts not to be intimidated by the PDRC's siege of state-run media outlets and stick to their planned rally today on Utthayan Road in Bangkok's Thawi Watthana district.

UDD secretary general Natthawut Saikuar yesterday reiterated the UDD leader's call for calm and to avoid incidents that would give the military an excuse to step in.

"It depends on the military. If we don't play into their hands, it is not easy for them to [stage a coup]," he wrote on his Facebook page.

He also said the PDRC would resort to violence to get the military to intervene, urging the red shirts to be on high alert in case they try this to force a coup.

Chief of Region 7 Police Bureau Pol Lt Gen Harnpol Nitwiboon said about 1,250 police have been deployed to provide security and direct traffic around the protest site. Traffic chaos is expected if the protest is prolonged as Phuddhamonthon Park, which is next to the protest venue, began holding activities from yesterday to Tuesday to mark Visakha Bucha Day.

In the warm-up to today's rally, red shirts in several provinces yesterday burned effigies of Constitutional Court judges and the NACC members.