The Centre for the Administration of Peace and Order (Capo) is vowing to use police commandos to arrest 14 core members of the anti-government People’s Democratic Reform Committee’s (PDRC) including protest leader Suthep Thaugsuban. 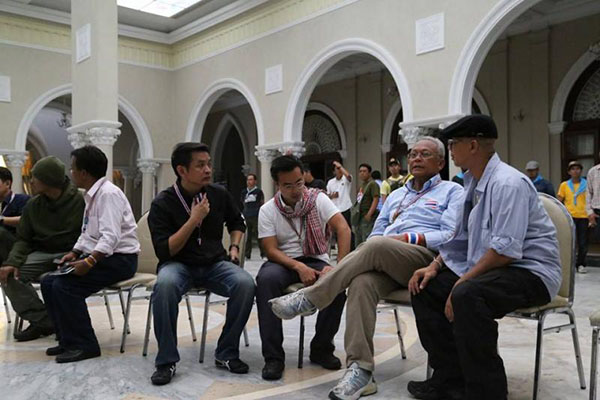 Announcing the operation yesterday, Capo secretary Tarit Pengdith insisted that police would not attempt to disperse protesters, but would target leaders instead.

He cited the Office of the Attorney-General (OAG) decision on Thursday to indict 51 PDRC figures including 14 core leaders who already face arrest warrants for treason.

The court will today hear the OAG’s request to indict the 51 on 10 charges in connection with the group’s movements. Capo expects more arrest warrants to be issued soon after the hearing, Mr Tarit said.

Immediately after any warrants are issued, Capo will start its operation to arrest the 14 PDRC co-leaders. The Anti-Money Laundering Office will also be asked to freeze the suspects’ assets.

The Arintharat Special Weapons and Tactics (SWAT) unit will provide policing for the operation, which is a key part of Capo’s efforts to step up law enforcement activities against the protesters, he said.

The operation is likely to lead to clashes and injuries, so members of the public who are not involved in the PDRC’s movements should avoid protest areas, he added.

Each of the 14 protest leaders is being guarded by PDRC security forces, so Capo will have to break its operation into 14 sub-operations to arrest the suspects, Mr Tarit said.

He claimed that the operation is necessary to prevent the PDRC and red shirts from clashing with one another, which could ultimately lead to a civil war.

He argued that many pupils would be returning to school to start a new term this week, so traffic on the road would worsen unless protesters vacated the site and allowed people to get on with their lives as normal.

Mr Sornrak claimed the PDRC’s occupation of the road had caused severe traffic congestion in the area over the past four to five months.

Later in the day, Pol Col Charoen Srisasalak, deputy chief of the Metropolitan Police Bureau’s Division 2, met Mr Sornrak and encouraged him to rethink his plan to reclaim the PDRC protest site.

Pol Col Charoen said the attempt to clear protesters would only lead to to confrontation, warning him that police would block the route the group intended to take if they attempted to go ahead with the plan to confront the PDRC.

Mr Sornrak then agreed to call off the operation and led his group back to the main pro-government protest site on Utthayan Road in Nakhon Pathom’s Buddha Monthon district.