The acting Senate speaker's permission for People's Democratic Reform Committee (PDRC) leader Suthep Thaugsuban to enter parliament premises and hold a closed-door discussion with him has sparked outrage from the red shirts and pro-government elements. 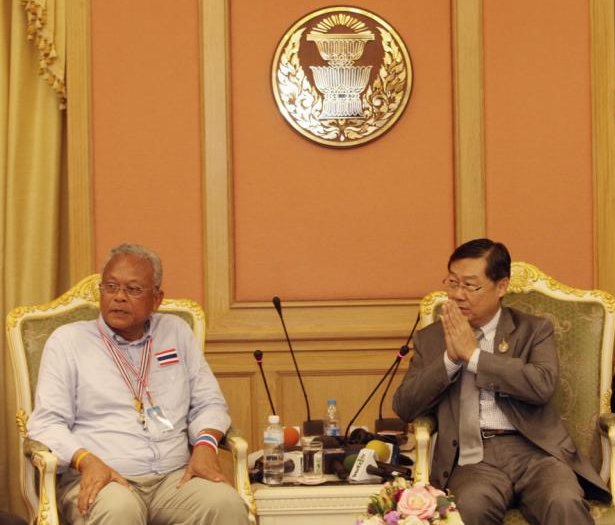 The Senate was holding an informal Monday session to discuss the political impasse.

As the session was in progress, Mr Suthep led demonstrators to parliament and conveyed a note to deputy Senate speaker and acting Senate Speaker Surachai Liangboonlertchai, who was chairing the meeting, to ask Sen Surachai to allow him to speak.

The anti-government Group of 40 senators voiced support for Mr Suthep to speak at the session, but other senators disagreed.

However, Sen Surachai, who chaired the session, allowed Mr Suthep to enter the parliament premises.

Sen Surachai agreed to meet for talks with Mr Suthep and other PDRC co-leaders in a reception room behind closed doors.

Mr Jatuporn said Sen Surachai could break the law if he bowed to Mr Suthep's demands.

He said the pair must be held responsible and charged with instigating insurrection, adding that there would be no political power vacuum as the PDRC hoped.

The majority of the informal Senate session supported a proposal for an interim prime minister to be installed under Section 7 of the constitution.

Of the total 150 senators, 86 attended the meeting and most were appointed senators, including the anti-government Group of 40.

The Senate session was held after Mr Suthep on Saturday called for the presidents of the Constitutional, Supreme and Administrative courts, the Election Commission chairman and the Senate speaker to work out a plan to nominate an interim government for royal endorsement under Section 7 of the constitution.

Mr Suthep gave them until Monday to meet his demand otherwise the protesters “would do it themselves”.

Political observers believed Mr Suthep’s demands were unlikely to be met since the issue is sensitive and it would put them at risk of committing illegal acts.

However, Lamphun Senator Tri Danphaiboon said the result of the informal Senate session could not be deemed as representing the collective opinion of the Senate as a whole.

Mr Tri said if the result of the session is wrongly used to represent the view of the entire Senate, the acting Senate speaker must take responsibility.

He said if Sen Surachai allowed Mr Suthep to speak to the Senate, he should also allow others to do the same to ensure fairness.

Appointed Senator Paiboon Nititawan told the meeting that the caretaker government is inept and the post of the prime minister is vacant. The Senate, as the only legislative body remaining, is duty-bound to find a way out of the conflict, he added.

Sen Paiboon insisted that a new prime minister must be sought immediately to fill the vacant post.

He said he will hand a letter to the acting Senate speaker to ask him to consider nominating an interim prime minister to break the political deadlock.

Sen Surachai said it was impossible for the Senate to find a way out of the country's political problems in one day. He said the Senate will consider proposals from all sides of the political conflict and will try to reach a conclusion, adding that public hearings should also be held.

Sen Surachai said he wanted the public to participate in the process to solve the country's problems.

He stressed that the conclusion from the meeting will be translated into a road map to break the political impasse, although it could not be finished by Monday because the issue must be dealt with carefully.

Sen Surachai said the informal Senate session was broadcast live Monday so the PDRC and Mr Suthep could see how the senators worked.

He said Mr Suthep should not set a deadline for the Senate as this would amount to pressuring the Upper House.

However, Sen Surachai said the Senate will try its best to come up with solutions as soon as possible for the benefit of the country, not for any particular groups.

Sen Surachai was nominated as Senate speaker in a vote on Friday night. His official appointment is awaiting a royal command.

In another development, Singthong Buachum, a member of the Pheu Thai Party's legal team, filed a complaint with Crime Suppression Division police on Monday against Sen Surachai for alleged abuse of power in violation of Section 157 of the Criminal Code.

Mr Singthong said in the complaint that Sen Surachai, as senate deputy speaker, had proposed a royal decree for an extraordinary Senate meeting from May 2-10 specifically to endorse the appointments of a judge of the Administrative Court and a member of the National Anti-Corruption Commission.

This violated the royal decree for the extraordinary Senate meeting, the Senate meeting regulations and Section 122 of the constitution regarding conflicts of interests, Mr Singthong said.