The Department of National Parks, Wildlife and Plant Conservation on Wednesday ordered the transfer of Kaeng Krachan National Park chief to an inactive post to facilitate the police investigation into the disappearance of prominent Karen activist Porlajee Rakchongcharoen, known as "Mr Billy". 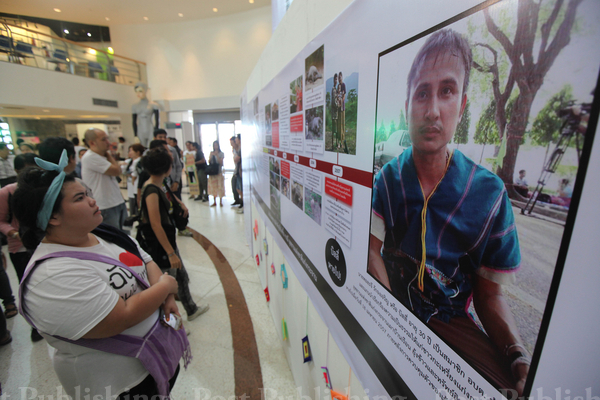 Visitors  tour the  Porlajee 'Mr Billy' Rakchongcharoen exhibition at the Bangkok Culture and Art Centre on May 11. The exhibition, entitled "We are Billy", was opened to raise awareness of the Karen environmental activist's disappearance. (Photo by Thiti Wannamontha)

Acting department chief Nipol Chotibal signed the order on Wednesday for the temporary transfer of Chaiwat Limlikit-aksorn from the park in Kaeng Krachan district of Phetchaburi to the Office of  Conservation Area Management Region 3 in neighbouring Ratchaburi from May 15-June 15.

"I wanted to ease the pressure on the issue and facilitate the police investigation,'' he said.

The park chief, whose tenure has been mired in controversy, had agreed to the order, and had in fact requested that he be moved out of the park, he added.

Mr Nipol said the transfer order was no a signal that Mr Chaiwat had been found guilty or linked in any way with the disappearance of Karen environmental activist Mr Porlajee, better known as Billy, who has has not been seen since mid-April.

It showed Mr Chaiwat's intention to cooperate with authorities in the investigation, he said.

The acting department chief admitted he had received a complaint from investigators that obstacles were being placed in their way. 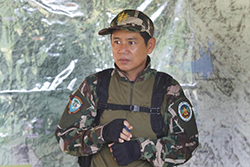 The department had earlier set up an investigation panel to find out whether Mr Chaiwat was involved in Mr  Porlajee's disappearance. The two-week investigation has been completed and its wee findings submitted to Mr Nipol.

The report said there was no solid evidence that Mr Chaiwat was involved, Mr Nipol said.

He was still awaiting the conclusions of the police investigation.

"I need to ensure justice for Mr Chaiwat, as there is no evidence that he is guilty of any crime," he added.

There have been suspicions that Mr Chaiwat was in some way involved in the Karen activist's disappearance.

Kaeng Krachan park officials detained him for possessing illegally harvested wild honey comb and bottles of honey on April 17. He was later officially discharged from custody, but has not been seen since.

A group of Karen people and their supporters went to the Natural Resources and Environment Ministry on Wednesday demanding a bigger effort to shed light on allegations that Mr Chaiwat could have played a role in Billy's disappearancre.

Chirasak Kateu, a representative of the Karen Assembly of Siam, said that the one-month transfer to Petchaburi was not enough. Mr Chaiwat could still influence the probe despite not being in the park.

The group demanded the ministry issue an order protecting and preserving the Karen tradition way of life, a ministerial order approved by a cabinet resolution in August 1990.

Mr Chaiwat said he was not worried about the case and called for fair treatment. He said he had shown his sincerity by cooperating with police and agreeing to be transferred out of the park.

A conflict between the park chief and Karen people erupted in 2011 when Mr Chaiwat set fire to  Karen shelters in the forest during a forest encroachment suppression campaign. He said those shelters were located outside the areas allocated to Karen people.

The group filed a complaint with the Central Administrative Court, with the department and the ministry in 2012. Mr Billy is a key coordinator in bringing the case.