US suspends military aid for Thailand

The United States Friday suspended US$3.5 million in military assistance for Thailand, about one-third of its aid to the ally, and urged Americans to reconsider travel plans after the army seized power. 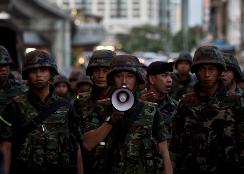 Thai army soldiers urge anti-coup protestors to maintain law and order during a protest in downtown Bangkok on May 23, 2014

State Department spokeswoman Marie Harf said Washington was also reviewing the rest of US aid to Thailand -- which totaled some $10.5 million in 2013 -- to look for further cuts.

"We have already suspended approximately $3.5 million" in funding and training for the Thai military, Ms Harf told reporters.

"We are reviewing all programmes to determine other assistance which we may suspend."

Ms Harf said the United States was looking through its allocated funding for international bodies, including the 10-nation Asean bloc, to identify money directed to Thailand.

The US has contacted junta leaders to deliver the message, Harf said.

"We urge the immediate restoration of civilian rule, a return to democracy and, obviously, respect for human rights during this period of uncertainty."

Under domestic law, the US is obligated to suspend assistance to foreign militaries that overthrow elected governments.

In updated travel advice, the State Department recommended that US citizens "reconsider any non-essential travel to Thailand" due to the unrest and restrictions on movements.

It said US government officials would put off all non-essential visits to the kingdom.

"US citizens are advised to stay alert, exercise caution and monitor international and Thai media," the advisory said.

Secretary of State John Kerry has strongly condemned Thursday's coup, saying there was "no justification" and that the move would have "negative implications" for relations between the two countries.

The top US diplomat urged the restoration of a civilian government, respect for press freedom and early elections.

Thailand is the oldest US ally in Asia and provided critical support in the Vietnam and Korean wars.