Red-shirt summoned by NCPO kills himself

A red-shirt supporter suffering from illness who had been summoned to report to the military's National Council for Peace and Order (NCPO) shot himself dead in his bedroom in Muang district of Ubon Ratchathani province on Monday morning.

Pol Maj Gen Apichart Phetprasit, Ubon Ratchathani police chief, said Sarawut Phuthornyothin, manager of Ubon Krungthaikollakarn Limited Partnership, locked himself in his bedroom on the second floor of his house and killed himself with a .38 pistol.

His death was reported to police about 8am.

His relatives told police they believed Sarawut took his own life because of illness and financial problems, Pol Maj Gen Apichart said.

They said his suicide had nothing to do with his having been summoned by the NCPO to report to junta  officials in Bangkok on Monday.

Sarawut was the 15th person on the list of 28 people summoned under the council's Order No 44 issued on Sunday night ordering him to treport to the army auditoriuim by noon on Monday.

Army deputy spokesman Winthai Suwaree also said Sarawut committed suicide because of personal problems. His death was not related to the NCPO's summons.

According to Sarawut's red-shirt colleagues, he thought that it would be too cumbersome for anyone who wanted to help him flee, and probably too traumatic for him if he was detained or arrested.

Sarawut has been praised on the anti-coup social media as a hero who would not bow to an illegal order. Sources said Sarawut was instrumental in campaigning for the revocation of the lese majeste law in  the northeastern provinces.

Academics in Australia have called on the coup leaders to quickly restore constitutional rule to Thailand.

Tyrell Haberkorn, a research fellow in political and social change at the Australian National University and the author of Revolution Interrupted, said the arbitrary detention was not only a derogation of Thailand's obligations as a state party to the International Covenant on Civil and Political Rights but could never be a component of a program of reform or the promotion of peace and harmony, let alone democracy.

"The courageous citizens who continue to protest in the streets, in defiance of martial law - who themselves risk detention - already recognise this," Ms Tyrell said. "But does [army chief] Gen Prayuth Chan-ocha realise it?"

National Tertiary Education Union (NTEU) president Jeannie Rea said the NTEU applauded an open letter from a group of 26 Thai scholars to Gen Prayuth on May 23.

Ms Rea said the scholars observed that none of the previous 11 coups in Thailand since 1932 has achieved its objectives. All of the past coups damaged the development of law, democracy and human rights.

According to the scholars, Thailand has become notorious worldwide because of the speed and severity of the imposition of restrictions and arrests of political leaders and activists. The international community cannot tolerate such actions, she said.

"We are appalled to read that universities have been ordered to monitor political activities on their campuses, and further that some universities responded by issuing orders to staff and students to desist from making any political comment in the media," Ms Rea said.

As academics and students who have been critics of the lese majeste law have been summoned, some of them have gone into hiding and reportedly face house raids by the military.

NTEU called for the abolition of the lese majeste law, which is interpreted liberally to persecute not just critics of the monarchy but also critics of the state, she said.

The NTEU, she said, supported and admired the courage of university staff and students gathering at Thammasat University and other protest sites. "Intellectual freedom and freedom of speech are fundamental tenets of a civilised and democratic society,” the statement said.

The Australian government has announced reduced its engagement with the Thai military, postponing three activities planned for coming weeks in Thailand.

It said it would also review defence and other bilateral activities and ban the coup leaders from entering  Australia.

About 10 Malaysians gathered outside the Thai embassy in Kuala Lumpur on Monday morning to protest against the May 22 coup.

The Malaysian demonstrators submitted an open letter to a Thai diplomat, calling for an end to military rule in Thailand. 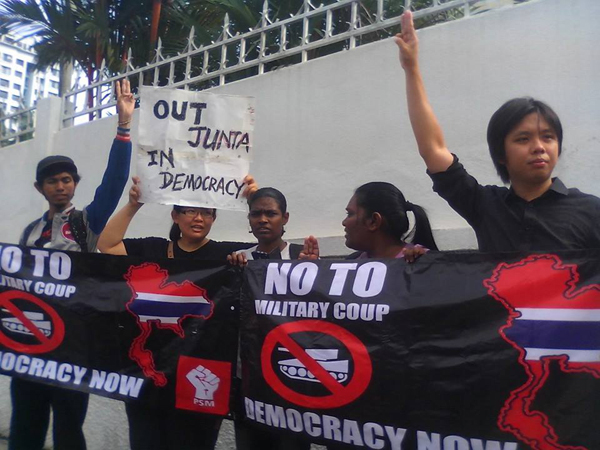 About 10 Malaysians gather outside the Thai embassy in Kuala Lumpur on Monday morning to protest against the May 22 coup.