A fortune teller respected by Gen Prayuth Chan-ocha has predicted the National Council for Peace and Order (NCPO) chief will be the next prime minister. 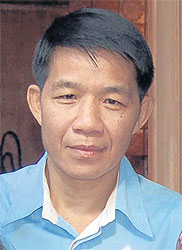 "I have been predicting for a long time that someone whose first name begins with the letter "P" will be the one to restore the nation. This man will sacrifice himself to solve the country's problems," Varin Buaviratlert said.

That person, he added, is Gen Prayuth, who was once the most trusted soldier of King Naresuan, and was reborn for this mission.

Since declaring the coup on May 22 and setting up the NCPO, the army chief has never ruled out the possibility of being the next prime minister.

He is set to retire from his military career at the end of September.

Mr Varin said Gen Prayuth should lead the country instead of picking other people to become the interim government leader. "If someone else is chosen, the country will collapse," the fortune teller said.

He ruled out another person whose name begins with the letter "P", former defence minister Gen Prawit Wongsuwanas, as a candidate.

Gen Prawit has been tipped for the post since Yingluck Shinawatra was ousted from it.

Gen Sonthi trusted his past prediction that he would become army chief.

Gen Sonthi carried on seeking the fortune teller's advice after he unseated then-prime minister Thaksin Shinawatra in 2006 and set up the Council for National Security (CNS).

The fortune teller was dubbed the "CNS astrologer" at the time.

Thaksin used to be one of his clients, but it is unknown whether Thaksin still uses his services.

While Gen Prayuth is keeping others guessing on his potential as prime minister, Gen Noppadon Inthapanya was tight-lipped yesterday on the coup leader's political future.

But the NCPO adviser confirmed that Gen Prawit, who chairs the advisory team, and another adviser, Gen Anupong Paojinda, had no desire to be prime minister.

Gen Anupong was the army chief before handing the post over to Gen Prayuth.

Asked whether Gen Prayuth was an appropriate choice for prime minister, Gen Noppadon said he did not want to answer this question.