Junta chief Prayuth Chan-ocha has assured Chinese investors that an interim government will be installed within three months as he sought to shore up economic ties on Friday. 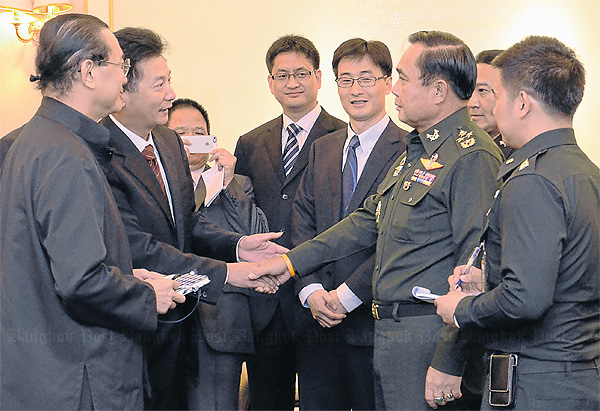 National Council for Peace and Order (NCPO) chief Prayuth Chan-ocha greets Chinese businessmen during a meeting at the army headquarters yesterday. Gen Prayuth assured them that a new interim government can be expected in three months and that Thailand and China will remain key strategic partners.

The National Council for Peace and Order (NCPO) chief was speaking during a meeting with key Chinese banking and industrial sector representatives at army headquarters in Bangkok.

Seeking to allay any post-coup concerns, Gen Prayuth insisted Thailand remains committed as ever to its strategic partnership "at all levels" with China.

He told the businessmen that investors and tourists would always be welcome, although noted that the junta would need to review and delay some large-scale investment projects. Projects that have already started will be allowed to continue, he said.

Gen Prayuth said the junta was placing emphasis on the need to crack down on corruption and conflicts of interest.

He insisted the NCPO would not demand any benefits from potential investors and asked the businessmen for their support in tackling corruption.

Gen Prayuth urged the businessmen to contact him directly if any state agency or individual demands under-the-table payments so he can deal with the problem. He also asked them to help spur the transfer of new skills and technology to Thailand.

Bilateral investment between Thailand and China should be mutually beneficial, Gen Prayuth said, adding that Chinese investors must take into account the environmental impacts and consider the use of alternative energy when they plan to build industrial facilities here.

NCPO spokeswoman Pathaporn Rattanadilok na Phuket said the businessmen — who also included figures from the IT and communication sectors, electrical appliances companies, car manufacturing companies and mining industries — had confirmed they would maintain their business, investment and trade cooperation with Thailand.

He hailed the junta's decision to send permanent secretary for foreign affairs Sihasak Phuangketkeow abroad to explain the post-coup situation and map out plans for reform.

Mr Panitan, a former government spokesman during the Abhisit Vejjajiva administration, said the US, the EU and Australia, which have strongly condemned the coup, believed the military's political intervention would hurt the economy.

That was why they wanted the political situation to return to normal as quickly as possible, he said.

However, he said the NCPO should try to avoid reacting strongly to these countries, as this would adversely affect relations between Thailand and the international community in the long term.

The junta "should be patient and explain the situation constructively".

"It's possible that if relations between Thailand and other countries, especially Western countries, turn sour, they may use all available means to put pressure on Thailand, such as imposing economic sanctions or downgrading diplomatic relations," he said.

"I don't want to have a conflict with you people [protesters] but please do that in your homes," he said.

Gen Prayuth suggested people who love the nation should hold up five fingers instead. Two fingers would be for the nation and the others for the King, religion and people, he said.

He also mentioned the NCPO's Reconciliation Centre for Reform (RCR) on the programme.

"The army will be only a facilitator, an observer and an information provider," he said.

"I will invite all parties to sit down together and that is the only role the army will play," he said.

Gen Prayuth stressed the importance of the efforts which will pave the way for the setting up of a legislative assembly and reform council.

The first stage of encouraging unity is to be undertaken through the RCR which will spread out from Bangkok and other cities down to the village level.

However, he said at the RCR stage, there would be no conclusions on reform and reconciliation. Conclusions would be reached by the reform council.

The coup leader denied he was rushing the process and said talks in the first stage under the RCR would ease possible conflicts when the legislative assembly and reform body are formed.