Anti-coup campaigner Sombat Boonngamanong is facing charges of cyber crime as well as of inciting unrest and violating junta orders. 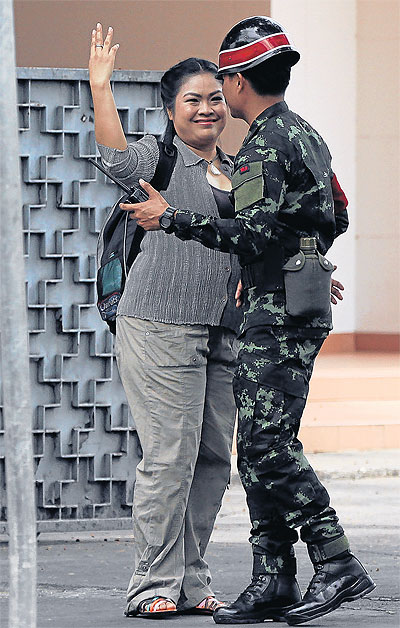 A woman flashes an anti-coup salute as she reports yesterday to the National Council for Peace and Order. Seksan Rojjanametakul

Pol Maj Gen Phisit Pao-in, adviser to the Information and Communication Technology Ministry, said the National Council for Peace and Order (NCPO) had requested that Mr Sombat be taken to the TCSD for questioning.

He could be charged with violating the Computer Crime Act for using online networks to instigate unrest, Pol Maj Gen Phisit said.

Mr Sombat, who went into hiding from the NCPO when the coup was announced last month after posting anti-coup messages on Facebook, was eventually detained on Thursday in Chon Buri’s Phan Thong district.

Mr Sombat was participating in a session "to adjust his political attitude", a source said yesterday.

A total of 31 people have been detained by the NCPO, and are facing interrogation before the junta decides whether they will be released or tried in military courts, the source said.

Relatives of the detainees visited them at the CSD yesterday morning.

Two of the 31 detainees were taken to a military court for approval to be given for their detention at the CSD to be extended.

They are Yiamyod Srimanta, head of a red-shirt group in the North, and Chainarin Kulab-am, of the Asia Update satellite TV channel belonging to the United Front for Democracy against Dictatorship (UDD).

They were sent to the military court with a request to detain them at the CSD for 12 more days.

Mr Yodyiam has been detained for ignoring an NCPO summons, while Mr Chainarin was arrested on Sunday for taking part in an anti-coup gathering at the Terminal 21 department store, which was deemed against the NCPO’s ban on political gatherings of five or more people.

If convicted, Mr Yodyiam faces a maximum prison term of two years and/or a maximum fine of 40,000 baht.

Mr Chanarin faces a maximum prison sentence of one year and/or a maximum fine of 20,000 baht.

Singthong Buachum, a former Bangkok MP candidate for the Pheu Thai Party, told reporters his house had been raided on Monday afternoon.

According to Mr Singthong, dozens of armed soldiers raided the house, before taking him to the First Engineer Battalion.

During the raid, soldiers showed him a letter summoning him to the NCPO. This confused Mr Singthong, who said he did not know that the NCPO wanted him to report in.

After talks at the battalion, he was taken back home on Monday evening, Mr Singthong said.

He said a number of undercover police officers came to his house again yesterday and invited him to meet Col Songwit Noonphakdee, chief of the 11th Infantry Regiment.

Mr Singthong was told by the officers that Col Songwit wanted to apologise to him for Monday’s incident, in case it had appeared aggressive.

Mr Singthong was informed that the raid on his house should not have taken place. Instead, soldiers should have been deployed to guard his house.

His talks with Col Songwit were interrupted by several phone calls, which Mr Singthong suspects were NCPO officials calling to rebuke the colonel over Monday’s incident.

Meanwhile, at the army auditorium in Bangkok’s Thewes area, a number of people required to report to the NCPO under Order No.58 arrived on Tuesday with their luggage.

Among them was Payap Shinawatra, the younger brother of ousted prime minister Thaksin Shinawatra, who arrived at the auditorium about 10.50am.

Worachet Pakeerut, a Thammasat University law academic who is a key member of the Nitirat group, had his wife, Patcharin Pakeerut, travel to the army auditorium on his behalf, saying he was sick and could not show up in person.

Seventeen others were asked to report under Order No.58.

At least 150 ethnic Rohingya people are stranded at sea off Thailand after their boat broke down, activists said on Wednesday, adding that several may have died and urging authorities to rescue the survivors.

Special investigators have seized about 3,500 smuggled cryptocurrency-mining units operating from rented buildings in Bangkok and Nonthaburi and stealing vast amounts of electricity.