A newspaper has accused Charoen Pokphand Foods (CPF) of buying fishmeal which it feeds to its farmed prawns from some suppliers that own, operate or buy from fishing boats that are said to use slave labour. 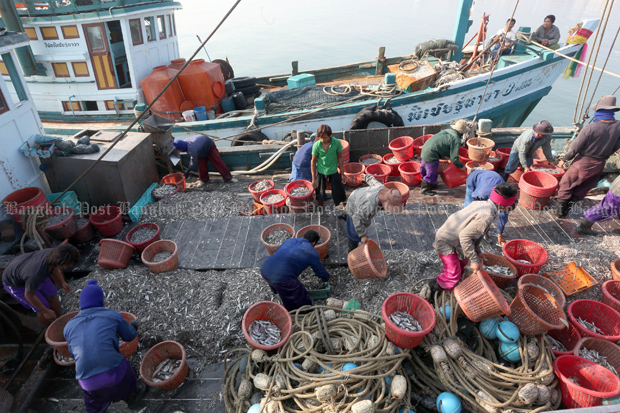 The Guardian newspaper published a special report on slavery on Tuesday, questioning whether Thailand's seafood industry is "state-sanctioned slavery".

But CPF, a subsidiary of Thailand's largest agricultural conglomerate Charoen Pokphand Group, argued the portion of feedmeal that may be involved such practices is minimal since 72% of its suppliers are certified.

The Guardian report said in addition to Walmart, Carrefour, Costco and Tesco, it has identified Aldi, Morrisons, the Co-operative and Iceland as customers of CPF. They all sell frozen or cooked prawns, or ready meals such as prawn stir fry, supplied by CP Foods and its subsidiaries.

CPF admits that slave labour is part of its supply chain.

"We're not here to defend what is going on," said Bob Miller, CP Foods' UK managing director. "We know there's issues with regard to the [raw] material that comes in [to port], but to what extent that is, we just don't have visibility."

But Aidan McQuade, director of Anti-Slavery International, said: "If you buy prawns or shrimp from Thailand, you will be buying the produce of slave labour."

Thailand is considered a major source, transit and destination country for slavery, and nearly half a million people are believed to be currently enslaved within Thailand's borders, the report said.

After being warned for four consecutive years that it was not doing enough to tackle slavery, Thailand risks being given the lowest ranking on the US state department's human trafficking index, which grades 188 nations according to how well they combat and prevent human trafficking.

Relegation to tier 3 would put Thailand, which is grappling with the aftermath of a coup, on a par with North Korea and Iran, and could result in a downgrade of Thailand's trading status with the US, The Guardian said.

In response, CP group issued a statement late on Wednesday, saying fishmeal made up less than 10% in its production of fish feed for its prawns.

"Fundamentally, CP believes that from factory to fishing boat each and every person who works for CP, with CP as a supplier or through any part of CP's supply chain must, as an absolute minimum be treated fairly and with dignity at all times," it said in the statement.

Currently, CP sources the fishmeal to make fish feed from 55 independent fishmeal processing plants of which 40, or 73%, are certified.

It explained these independent plants process fishmeal from either by-product or by-catch.

By-product is from the trimmings of tuna and surimi production and is all certified.

By-catch, sometimes referred to as "trash fish", comes mainly from the seas outside Thailand (typically Indonesia) and is a fraction of a boat's catch that is completely unsalable in any other market.

Typically this by-catch is frozen in blocks on large vessels called "mother ships" that are out to sea for months at a time. The frozen blocks are collected by smaller transport vessels to be sold at Thai fishing ports.

CP said the by-catch and mother ships are what The Guardian report is talking about.

"There are an estimated 200,000 illegal migrant labourers working in the Thai fishing industry — many of them working on these ‘mother ships'. Some (16% according to a report by the US Department of State) are allegedly exploited by ‘gang masters' and agents simply because these boats have to depend on this type of labour. The Myanmar people and Cambodians are easy prey to exploitative employers who can supply labour immediately and these boats — one way and another — fly the flag of Thailand."

To improve the situation, CP said it is auditing its entire operation and will implement an independent spot check coordinated system for ensuring that its supply chain is and continues to be slavery-free.

By 2015, it plans to buy fishmeal only from certified suppliers.

It also claims to be the only manufacturer paying a supplier a premium for fully certified products. At the end of 2013, CPF paid an additional 48.2 million baht in premium payments.