An area of land near the Makkasan Airport Rail Link station is reserved for commercial development to help clear 80 billion in debt owed to the Finance Ministry, the State Railway of Thailand (SRT) governor said Thursday, and could not be used as a passenger van hub as suggested by the junta. 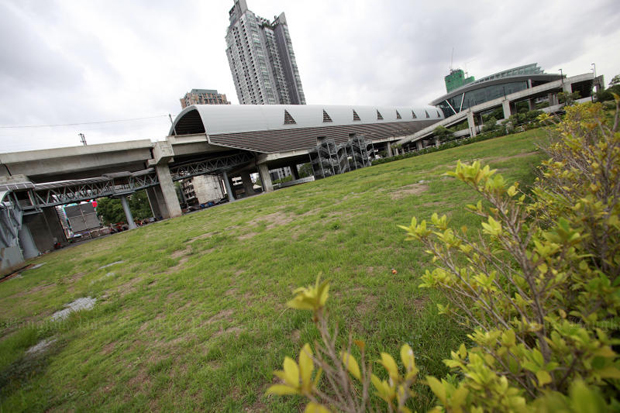 Part of the empty space at the Makkasan Airport Rail Link station. (Photo by Thanarak Khunton)

“The value of land in this area is very high. If a portion of it is taken away, what will be value of the remaining land? I could not agree with the plan to use it,” governor Prapas Chongsanguan said.

The National Council for Peace and Order (NCPO) had proposed using the land as a permanent passenger van park for Victory Monument passengers, Mr Prapas said.

The SRT governor suggested the NCPO use another large piece of land owned by the SRT in the Asoke area as the city’s new passenger van hub.

The area was large enough to accommodate all city vans and connect with the BTS skytrain and the underground MRT, which would be convenient for commuters, he said.

The SRT last year approached the Finance Ministry to commercially develop two large areas of land it owns in Bangkok in exchange for writing off an 80 billion baht debt owed to the ministry.

The two areas are 497 rai in the Makkasan area near the airport rail link, and 277 rai near Chong Nonsi and Rama III roads, much of it along the Chao Phraya river bank.

Mr Prapas said the SRT planned to ink a 90-year land lease agreement for the two blocks of land under an agreement with the Finance Ministry to pay off its huge debt.

He said he had reported administrative problems within the SRT to deputy NCPO chief ACM Prajin Juntong, who is in charge of economic affairs. He also raised the proposal to settle the agency's debt by developing the Makkasan and riverside property for commercial purposes.

ACM Prajin said it was a good idea and did not oppose it, Mr Prapas said.

“The SRT is willing to cooperate in solving traffic problems in the capital, but it must know where it stands,” he said.

Baby SUV gets the full-fat treatment to remain unrivalled in its class.

Regulations for small and medium-sized enterprises (SMEs) and startups in raising funds through capital market mechanisms are expected this quarter, says the Securities and Exchange Commission (SEC).

The domestic gold price could spike to 27,500 baht per baht-weight over the next six months.