The National Council for Peace and Order’s (NCPO) performance is approved of by most people, according to a recent poll, but the honeymoon may not last long. 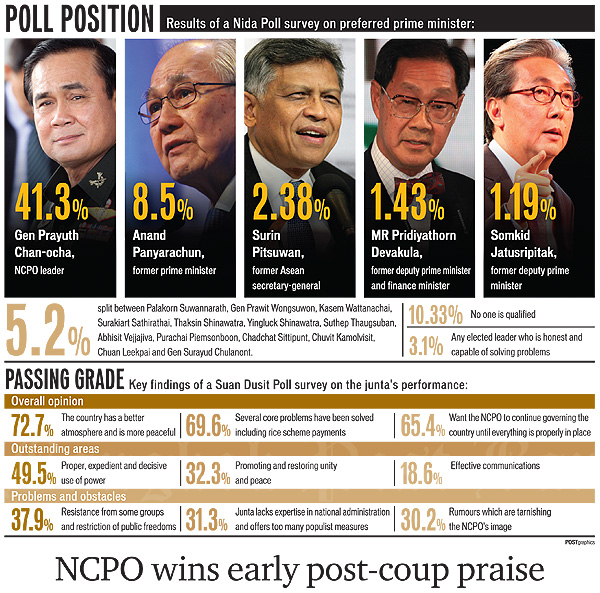 Since the coup on May 22, the NCPO has been busy stamping out criticism, launching populist measures to appeal to the public, and fighting corruption.

The poll results suggest that one month after the coup, the public is grateful the junta has brought a peaceful atmosphere back to the country and ended the six-month People’s Democratic Reform Committee (PDRC) street protests in Bangkok.

It also averted the prospect of violence when the red shirt United Front for Democracy (UDD) against Dictatorship escalated its rally to counter the PDRC.

According to a Suan Dusit Poll released Sunday, the public gives the NCPO a high approval rate of 8.82 out of 10 for its first month.

Asked what they thought about the overall performance of the NCPO, 72.79% of respondents said the country is peaceful and without quarrels; 69.6% said the NCPO has tackled important problems including paying farmers for their pledged rice and cutting the cost of living; and 65.4% want the NCPO to stay on until problems are solved properly.

The survey was conducted among 1,614 people nationwide between June 17 and Saturday.

The immediate task of the junta was to prevent resistance and anti-coup movements.

In the first two weeks after the coup, the NCPO summoned critics and dissenters, many involved in political conflicts over the past nine years, one year before the previous military coup toppled Thaksin Shinawatra government.

The NCPO said it summoned and detained critics to “adjust their attitude” and pave the way for the reconciliation process. The summonses covered all parties but placed particular emphasis on red shirts and their sympathisers nationwide, including academics and activists.

The coup-makers also moved to suppress armed groups which they believe were prepared to stage anti-coup movements. Many raids and arms seizures took place particularly in the North and Northeast, strongholds of the red shirts and the Pheu Thai Party.

After suppressing the critics, the coup-makers pressed ahead with works to gain popular support.

They included payments for farmers’ pledged rice and freezing energy and consumer goods prices. The junta also offered free entertainment under the theme of returning happiness.

It is now focusing on fighting corruption, including any left over by the previous government.

Some investment projects have been suspended, and controversial projects scrapped such as the rice pledging scheme and One Tablet per Child project.

Justice permanent secretary Kittipong Kittayarak Sunday lauded the NCPO’s efforts in its first month, saying the military was on the right track.

However, he called on the junta to pay attention to the details, especially concerning national reconciliation. Opposing groups must be brought in to find common ground and the military must listen to all parties involved, he said.

Several groups, including the UDD, are waiting for the formation of the next government, reform council and national legislative assembly. But political observers say it is unlikely the NCPO will be able to please everyone.

The PDRC wants change to uproot the “Thaksin regime” while pro-Thaksin UDD supporters want reforms which are fair to them and Thaksin.

Who to choose as prime minister is another tough issue. Some believe Gen Prayuth may take the position himself after he retires from military service in September.

Most people would support Gen Prayuth as prime minister, according to another poll released Sunday by the National Institute for Development Administration, or Nida Poll.

Conducted at the weekend among 1,259 people, 41.3% of respondents said the NCPO should nominate Gen Prayuth.

That could bring new risks for the general. After the election on March 22, 1992, Gen Suchinda Kraprayoon, the coup leader who toppled the Chatichai Choonhavan administration, was appointed as the prime minister, resulting in the so-called Black May protests.

Chaiphan Prapasawat, director of Institute for Community Rights, backed the NCPO’s reform plans. He said the May 22 coup was different from those in the past.