Pheu Thai on Tuesday denied connections with with its former party leader who had launched a campaign against the military coup. 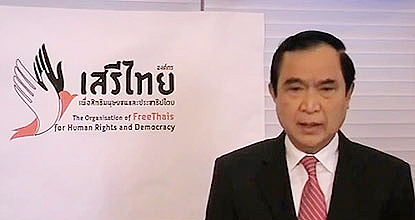 Former Pheu Thai Party leader Charupong Ruangsuwan announces the setting of of a new organisation to counter the coup.

Pheu Thai acting deputy secretary-general Chawalit Wichayasut said the party had no hand in setting up the 2014 version of Seri Thai, whose sub-title is Organisation of Free Thais for Human Rights and Democracy (FT-HD).

Charupong Ruangsuwan. the fugitive ex-leader of Pheu Thai who announced the new group, refused to report to the National Council for Peace and Order (NCPO) authorities early this month, and his whereabouts are unknown. Rumours say he has crossed the border to a neighbouring country.

Mr Charupong launched the new organisation on Tuesday, saying it would press for the return of democracy after army chief Gen Prayuth Chan-ocha unseated his Pheu Thai Party-led government on May 22.

Mr Charupong is currently the subject of an arrest warrant because of his refusal to report to coup authorities.

The newly-launched organisation will operate from a country he refused to identify, he said in the statement, also posted on YouTube.

According to Mr Charupong, mainly through a post on his Facebook page, the new Free Thai movement is backed by a coalition of former lawmakers, academics, red-shirt figures and other opponents of the army power grab.

The name "Seri Thai" evokes memories for many Thais of the World War II underground, led by Pridi Banomyong, code name Ruth, that fought the Japanese from inside Thailand, although Mr Charupong did not refer directly to that patriotic movemernt.

Pheu Thai's officials in Thailand, through Mr Chawalit, quickly issued statements that they had nothing to do with the so-called Seri Thai, and said they have made no political moves to disrupt peace restoration plans by the NCPO.

''The duty of the Pheu Thai Party now is to cooperate with all sectors in the country to restore peace," said Mr Chawalit. "No acting executive members of the party move against the work of the NCPO. We are part of the plan to restore democracy.''

Mr Charupong, who also served as interior minister in the Yingluck Shinawatra cabinet, resigned from the party last week and the resignation automatically ended the terms of all party executive members.

NCPO deputy spokesman Winthai Suwareee said Tuesday the junta is watching the movement and called on other countries to not render help to Mr Charupong's FT-HD to instigate trouble for Thailand.

The Foreign Ministry has been assigned to explain to other countries what is going on in Thailand, Col Winthai added.