Suvarnabhumi to get e-taxi queue system

The National Council for Peace and Order (NCPO) says its efforts to regulate taxi services in Bangkok and surrounding provinces will begin to take shape in two months. 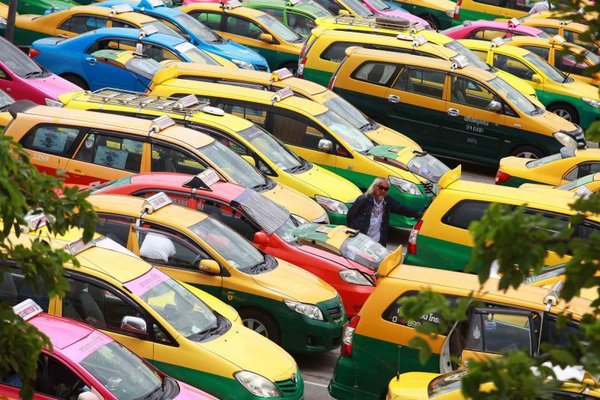 The National Council for Peace and Order (NCPO) promises that within 60 days, this pileup of taxis at Suvarnabhumi airport,and the mafia gangs who try to control them, will be on the way to an orderly, fair transportation service. (Photo by Somchai Poomlard)

In the first step, the goal is to ensure proper law enforcement to prevent "influential people" from meddling with taxi service operators, said Maj Gen Nirandorn, who commands the 11th Military Circle which is responsible for security in Bangkok, Nonthaburi, Pathum Thani, Samut Prakan, Nakhon Pathom and Samut Sakhon.

In the second step, the junta's task force would amend transport regulations to enhance authorities' ability to tackle problems with taxi services, which should be completed in two months.

The final step will focus on ensuring the reform is sustainable, Maj Gen Nirandorn said.

Meanwhile, city police say measures aimed at regulating street vendors will be carried out next month at five selected hotspots in the capital.

Pavements in all five areas are densely packed with street vendors, leaving little room for pedestrians.

When the new system is installed, passengers will be able to book a taxi simply by pressing a button and receiving a ticket, she said.

The ticket will include information such as the full name of the taxi driver and the licence plate number of the taxi, which could be useful in the event that a complaint needs to be made, Ms Raweewan said.

Passengers will also be able to customise their requests for specific types of taxis, such as larger cars in the event that they have several pieces of luggage with them, she said.

"The ticket will also show how many other passengers are ahead in the queue," Ms Raweewan added.

The airport is also considering installing a system to standardise fares for chartered taxi services to destinations outside of Bangkok, she said.

The system would probably be connected with the airport's taxi booking system, Ms Raweewan said.

Don Mueang airport director Jaturongkhapol Sodmanee said the a similar taxi booking system would be installed there as well.

The new system should be available in about six months, he said.

Five types of businesses and public establishments in Bangkok reopened on Monday under strict disease control regulations following a months-long shutdown due to the third wave of Covid-19.

SEVILLE: Sweden were out-passed by a factor of over five to one against Spain in their opening Euro 2020 Group E match but they made no apologies for shutting down the Spaniards in a dull 0-0 draw on Monday.

The National Anti-Corruption Commission is considering whether to launch an inquiry against at least 10 people for their alleged role in delaying justice in the 2012 hit-and-run case involving Vorayuth "Boss" Yoovidhya.