The National Council for Peace and Order (NCPO) has welcomed the launch of the BBC World Service's new social media service in Thailand, saying it will afford the broadcaster a better understanding of the local situation.

The BBC on Wednesday said the aim of the new service is to offer people an alternative source of information. 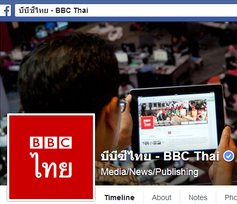 The operation will cover local and international news in Thai and English for an initial period of three months, the British broadcaster said, launching on Facebook at 6.30pm Thursday.

"One of the fundamental principles of the World Service is to bring impartial and accurate news to countries when they lack it," Liliane Landor, head of language services at the BBC World Service, said.

"We think the time is right to trial a new Thai and English digital stream to bring trusted news and information to people inside Thailand."

NCPO spokesman Werachon Sukondhapatipak said he was happy to help the BBC "better understand the situation in Thailand".

"We don't have any problem as long as they don't broadcast information that is negative or has an impact on the stability of the country," he said.

Col Werachon stressed that maintaining peace is vital for forging national stability. News that is not regarded as detrimental to stability is welcome, he said.

Last month the junta said it would set up five panels to monitor national and international news organisations.