The interim charter has been endorsed by His Majesty the King, according coup leader Prayuth Chan-ocha, who received it at a royal audience later on Tuesday. 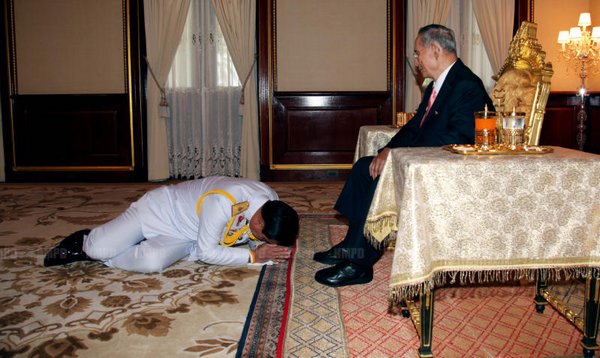 Gen Prayuth Chan-ocha, head of the National Council for Peace and Order (NCPO), receives the endorsement (seen under his hands) of His Majesty the King during a royal audience Tuesday evening. (Photo courtesy of the Royal Household Bureau)

Gen Prayuth informed the meeting of the National Council for Peace and Order (NCPO) on Tuesday of  the royal endorsement of the temporary constitution.

He received the endorsed charter from His Majesty at an audience at Klai Kangwon Palace in Hua Hin district of Prachuap Khiri Khan later on Tuesday.

The charter was announced Tuesday night after its posting on the website of the Royal Gazette.

The NCPO would reveal its details on Wednesday.

This would pave the way for the setting up of a national legislative assembly, an interim government and a reform council.

The army chief and coup leader said last month that the legislative body would be formed a month or so after the country had an interim charter, and an interim administration would be formed by September. The reform council could be established in October, he added.

Gen Prayuth has never ruled himself out as prime minister of the interim government. He is due to retire at the end of September.

The NCPO said on Tuesday that it planned to send more than 400 bills to the national assembly. Legal experts led by Visanu Krue-ngam were studying 138 legislative bills earlier approved by the government unseated by the May 22 coup.