Former prime minister Yingluck Shinawatra will return to Thailand to fight charges of dereliction of duty in the rice-pledging scheme, her lawyer repeated Tuesday as the likelihood of charges moved a step closer. 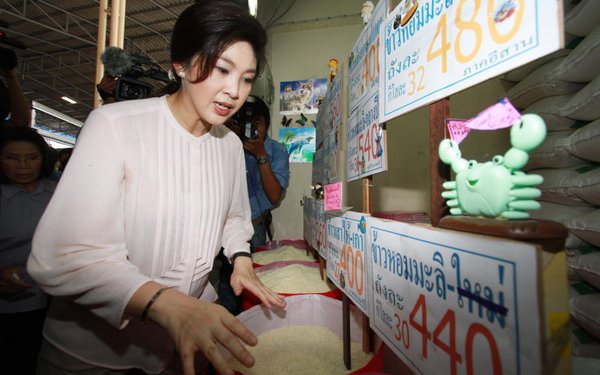 Ex-premier Yingluck Shinawatra checks out grades of rice in this 2012 trip to the Pichai market in Nonthaburi. She now appears certain to face corruption charges over rice pricing - if she returns to Thailand as promised. (File photo by Pattanapong Hirunard)

The National Anti-Corruption Commission (NACC) forwarded the case to the Office of the Attorney-General (OAG), recommending Ms Yingluck be indicted in the Supreme Court's Criminal Division for Holders of Political Positions.

On July 17, the NACC recommended Ms Yingluck be indicted for dereliction of duty in failing to deal with corruption and losses in the rice-pledging scheme. The NACC estimates the rice scheme lost at least 500 billion baht.

The NACC ruled by a vote of 7-0 there were sufficient grounds to allegations that Ms Yingluck was negligent in failing to scrap the scheme, despite knowing it was plagued by corruption and losses.

This would be in violation of Section 157 of the Criminal Code and Section 123/1 of the National Anti-Corruption Act.

Norawit Lalaeng, the lawyer representing Ms Yingluck, said he will submit a petition to the OAG today asking it to ensure justice and fairness for Ms Yingluck.

She has criticised the NACC for "unfair practices" in the investigation against her. Ms Yingluck previously requested additional defence witnesses, but was refused by the NACC.

Mr Norawit said the NACC rushed its investigation into the case and its findings were still incomplete, adding the petition, which will be submitted to the OAG, will include fresh information.

The lawyer said he believed the attorney-general will accept the petition and give Ms Yingluck fairness and justice.

Ms Yingluck was allowed by the National Council for Peace and Order to leave for a holiday in Europe and the United States on July 23.

Questions have been raised as to whether Ms Yingluck will ever return to Thailand to face the charges against her.

Santhanee Ditsayabut, deputy spokeswoman of the OAG, said the office would set up a working panel, chaired by the deputy attorney-general, to examine the evidence and witnesses.

If the panel concludes the case has sufficient weight, the OAG will forward the indictment of the former prime minister to the Supreme Court within 30 days as required by law.

But if it finds there is not enough information, it will set up a joint panel with the NACC to reconsider the case and aim for a conclusion within 14 days, Ms Santhanee said.

In the meantime, Ms Yingluck has the right to continue to call more witnesses in her defence.

If she does, the OAG will determine whether the new witnesses or evidence are redundant, what new information they would bring and whether they can challenge existing witnesses and evidence, Ms Santhanee said.