His Royal Highness Crown Prince Maha Vajiralongkorn has stressed the need for members of the National Legislative Assembly (NLA) to be scrupulous in carrying out their duties for the sake of the country. 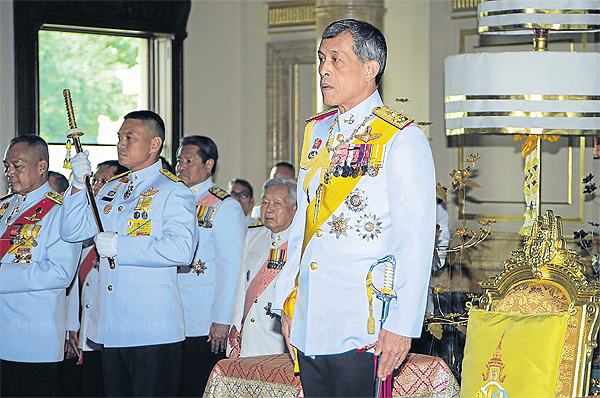 The Crown Prince was addressing the 197 NLA members as he represented His Majesty the King in presiding over the state inauguration ceremony of the assembly at the Ananta Samakhom Throne Hall in Bangkok yesterday.

Army chief Gen Prayuth Chan-ocha, leader of the National Council for Peace and Order (NCPO), led the 197 NLA members in welcoming the Crown Prince at the throne hall before the ceremony.

The Crown Prince told NLA members that the congregation of the assembly heralds a good start for all NLA members to work on drafting the new permanent constitution and legislation to restore democracy, national stability and security.

He said assembly members should realise the importance of their duties and be fully committed to working together and completing their duties scrupulously, correctly and quickly for the sake of national and public interest.

After the ceremony, NLA member Klanarong Chantik, a former National Anti-Corruption Commission member, said he believed NLA members had taken heed of the Crown Prince's remarks and will devote themselves for the good of the country.

The NLA is expected to convene its first meeting today to select a president and two vice-presidents.

Pornpetch Wichitcholchai is the favourite for the post of NLA president, while former Senate speaker Surachai Liengboonlertchai is expected to become one of two NLA vice-presidents. Mr Pornpetch is an ombudsman and serves as a legal adviser to the NCPO.

Meanwhile, a third member of the newly appointed NLA has resigned, due to being previously banned from politics.

Maj Gen Intarat Yodbangtoey said yesterday he submitted his resignation letter to the NCPO on Monday.

Maj Gen Intarat was a deputy leader of the now-dissolved Matchimathipatai Party. As a party executive, he had been banned from politics for five years after the party was dissolved on Dec 2, 2008.

Section 8 (4) of the 2014 provisional constitution prohibits anyone banned from politics from joining the NLA, rendering him ineligible.

Maj Gen Intarat said he did not mind being disqualified, saying he can work on behalf of the country in any position.

A royal command issued on July 31 named 200 members of the NLA, based on recommendations by the NCPO.

As a result of Maj Gen Intarat's resignation, the NLA now has only 197 members.

Gen Thawatchai was a member of the Chartpattana Party until early this year and, thus ineligible for the NLA under the interim charter.

Mr Aziz, the country's Muslim spiritual leader, declined, saying it would conflict with his  role as head of the Islamic community in Thailand.

Norarat Pimsen, secretary-general of the Senate who also acts as the NLA's secretary-general, yesterday said all NLA members must submit declarations of their assets and liabilities acquired both before and after their appointments to the NLA.

This is in the same manner as the previous NLA, set up after the 2006 coup.