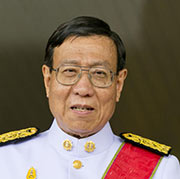 Pornpetch Wichitcholchai is voted the president of the National Legislation. Assembly.

All three were unchallenged since they were the only persons nominated for their respective positions.

The voting took less than five minutes to complete.

Somporn Thepsittha, 89, the most senior NLA member, acted as acting NLA president during the session.

"The NLA consists of men of virtue who were carefully screened. An assembly without noble men is not a parliament. I'd therefore like to call this assembly the parliament of virtuous men," he said.

He started his career as a lawyer at the Council of State and was a Supreme Court judge, He was also a member of the NLA set up after the 2006 coup, as well as a senator and an ombudsman.

He was a judge in the rubber saplings case of the Supreme Court's Criminal Division for Persons Holding Political Positions in which 44 politicians and civil servants had been acquitted of a corruption charge.

He was also the presiding judge of a case in which Thaksin Shinawatra had been found guilty of abusing his position as prime minister to benefit Shin Corp, causing 66 billion baht in damages to the state.

Mr Pornphet, also adviser to the National Council for Peace and Order (NCPO)'s chief, said after Friday's vote it was unclear whether the NLA's first mission was to select the prime minister.

"We have to wait for the royal endorsement of the NLA president and vice presidents first," he said.

Asked whether the NLA would support the nomination of NCPO chief Gen Prayuth Chan-ocha as prime minister, Mr Pornphet said he shared the same view as most people but there was a procedure that all had to follow.

Outside parliament, however, the NLA has not gone unchallenged.

Srisuwan Janya, president of the Association of Organizations for the Protection of Thailand's Constitution, submitted a letter to the Ombudsman Office on Aug 4, claiming the NLA composition was not in line with the interim constitution, which stipulates diversity in professions.

He said naming relatives, former superiors and friends to be paid and compensated as lawmakers on top of their salaries or pensions as government officials constituted a conflict of interest.

Commenting on the accusation, Mr Pornphet admitted there was some ground as he still held the position of ombudsman.

"It remains to be seen whether Mr Srisuwan has the right to submit the complaint and there is already an organisation to consider such issues," he said.

Asked whether he would resign from one of the positions, Mr Pornphet said: "I've served in more than one roles all my life. The important thing is doing so must not be unconstitutional or illegal.

"My being the NLA president is definitely not illegal but I'm considering it from other aspects such as appropriateness, capabilities and conflicts of interest.  I may end up having to choose one or the other," he said.