The newly-elected president of the National Legislative Assembly (NLA), Pornpetch Wichitcholchai, has admitted that his role as an NLA member might conflict with his role as an ombudsman. 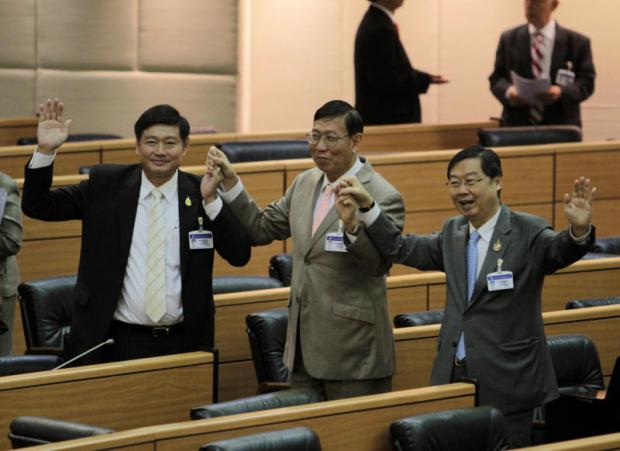 Mr Pornpetch said his dual role could pose problems given that the current tasks of the Office of the Ombudsman, which is an independent organisation, also includes scrutinising the work of the NLA.

He said that in case of a conflict he might have to choose between the post of ombudsman, for which his tenure has four years remaining, and the assembly membership.

He said being an NLA member is the "most honourable" job he has ever held.

He made the comment after the assembly unanimously voted him as the body's president yesterday.

However, Mr Pornpetch insisted that his appointment to the NLA is legal and in compliance with Section 41 of the provisional constitution.

The section stipulates that any legal requirements prohibiting individuals from taking political office cannot be applied to appointees of the NLA, the National Reform Council, the National Council for Peace and Order (NCPO) and members of a committee responsible for drafting the new permanent constitution.

Mr Pornpetch is also adviser to NCPO chief Prayuth Chan-ocha and a legal expert who sat on a legal team tasked with drafting the interim charter.

All three appointments were unchallenged. The voting took less than five minutes. Of the total 197 NLA members, 191 attended the meeting yesterday.

Gen Prayuth will submit the names to His Majesty the King for royal endorsement.

Mr Pornpetch said the process to select the interim prime minister will follow the royal endorsement of the NLA president and vice-presidents.

Mr Pornpetch said his role as an adviser to Gen Prayuth should not pose any problems as it was an informal post.