Police and health officials have raided and shut down an obstetrics and gynaecological clinic in Sathon on suspicion it has been operating as an in vitro fertilisation (IVF) clinic without authorisation. 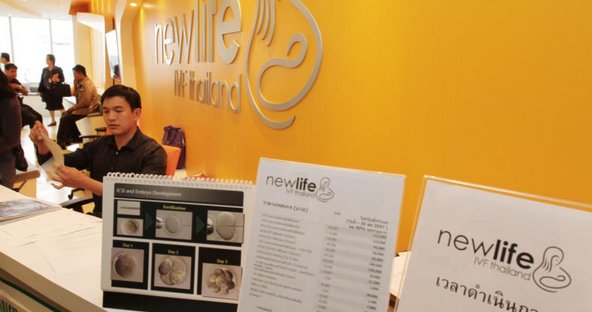 Police say the clinic may be connected to the nine babies discovered during a raid on a condominium in Lat Phrao last week.

Authorities from the Department of Health Service Support and the Royal Thai Police Office's children and women's protection sub-division raided New Life IVF clinic on the 18th floor of Bangkok City Tower Thursday afternoon and found the clinic did not have a licence.

The clinic was immediately shut down for violating the law governing health-care institutions and medical ethics.

The owner of the clinic was identified as Dr Phatsama Wijinsaswijai. The doctor, who has a degree in obstetrics and gynaecology, had served about a hundred customers recently.

The authorities were investigating whether this clinic had provided commercial surrogacy services as suspected, and if it was linked with the discovery of the nine babies, believed to belong to Mitsutoki Shigeta, a Japanese businessman who reportedly fathered 15 babies to surrogate mothers in Thailand.

Mr Shigeta fled Thailand recently. At least three of the babies are also believed to have been taken out of the country.

Police are still investigating whether the children were part of a human-trafficking scheme.

In another development, Pol Col Chatri Pinyai, a lawyer with the Department of Health Service Support, lodged a complaint with Lumpini police seeking legal action against Pisit Tantiwattanakul, director of the All IVF clinic at Siwayathon Tower in Pathumwan district, for failing to comply with the law governing health-care establishments.

He said Dr Pisit had violated the law by providing surrogacy services for customers using mothers who were not relatives of one of the commissioning parents, as required under the Medical Council of Thailand's (MCT) surrogacy regulations.

Pol Maj Gen Suebsak Phansura, chief of Metropolitan Police Bureau Division 5, said it should take roughly a week for the police to look into the matter before summoning Dr Pisit and others for questioning.

If there is clear evidence the doctor had broken the law, police would probably seek an arrest warrant for him without asking him in for questioning first, said Pol Maj Gen Suebsak.

Meanwhile, MCT president Somsak Lohlekha has raised objections to a bill seeking to ban commercial surrogacy. The bill has already been approved in principle by the junta.

He was concerned that totally banning commercial surrogacy would be impossible, Dr Somsak said.

Because the draft legislation states the MCT is required to map out guidelines for legal surrogacy practices, the medical council decided on Thursday to set up a panel to study 10 sections of the bill it was concerned about, said Dr Somsak.

In practice, it is very difficult to allow only women who are relatives of one of the commissioning parents to serve as a surrogate, said the doctor.

Wichian Chawalit, permanent secretary for Social Development and Human Security, meanwhile, insisted that the ministry has been working on the surrogacy bill for almost 10 years and the draft legislation has already gone through a sufficient number of hearings.

He was responding to the Public Health Ministry's call for the Social Development and Human Security Ministry to conduct a referendum on the bill.

Mr Wichian said the bill was being forwarded to the National Legislative Assembly to be passed into law. He stressed that the essence of the bill was to make technology available for infertile couples, but not everyone wanting to have a baby would qualify for IVF and surrogacy services.

The MCT also resolved to set up a special sub-committee to launch a probe into two doctors suspected of involvement in the case of baby Gammy, who was born with Down's syndrome to a Thai mother, and allegedly abandoned by his Australian surrogate parents.