Martial law is still necessary to combat opponents intending to derail the work of the National Council for Peace and Order (NCPO), a top officer in charge of security said on Saturday. 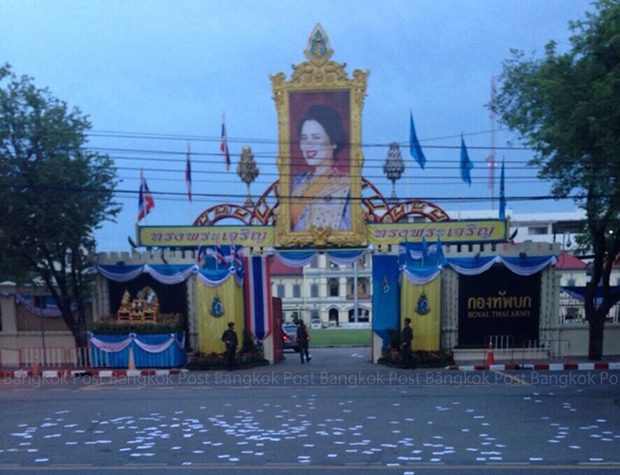 Leaflets with anti-coup messages are scattered in front of the army's headquarters on Friday morning. (Photo by Wassana Nanuam)

Martial law will "keep them in check", said Theerachai Nakwanich, chief of the army's Region 1.

"If it ends today, there will be no tools to work with and that will make it difficult for authorities to operate."

Gen Prayuth Chan-ocha invoked martial law on May 20 after warning that political unrest could spiral out of control. Two days later the army chief seized power in a coup.

While martial law has brought an end to public gatherings with political overtones, leaflets with anti-coup messages have been found in at least three locations this month. They first surfaced on Aug 3 in front of the National Anti-Corruption Commission on Sanam Bin Nam Road and in front of the government complex in Nonthaburi.

The size of the papers and the messages they contained were the same as those found scattered in front of the army headquarters on Ratchadamoen Avenue on Friday morning. The leaflets found at the government and army sites also bore the same word "Serithai", meaning Free Thailand.

Friday's incident underscored concerns about attempts against the NCPO said Lt Gen Theerachai, who is also responsible for the Peace and Order Maintaining Command for the military regime.

"We know there are people with ill intentions toward the operation of the NCPO," he said, adding that all three cases could be linked to the same group.

Police are still looking for clues that could lead them to those who managed to distribute leaflets under the nose of the army on Friday.

Initial reports by Nang Loeng police said a man in a taxi scattered them before fleeing the scene. The vehicle was driven from the Makkawan Rangsan Bridge.

He said security camera footage had captured a motorcycle driver strewing the paper. He dropped the leaflets and then sped off toward the bridge.

The licence plate captured by the camera was not clear and police were checking other cameras in the area, he added.