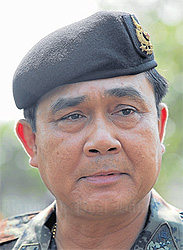 A source close to him said Gen Prayuth has had his measurements taken to get proper suits for use at various functions when he is prime minister.

His wife, Naraporn Chan-ocha, a former associate professor at Chulalongkorn University's faculty of arts, looks after his personal details.

She also helps keep his moods in check, advising him to stay calm and keep smiling before the public as Gen Prayuth is known to be short-tempered, the source said.

When Gen Prayuth was appointed army chief, Mrs Naraporn resigned from the university to assume a full-time role as president of the Thai Army Wives Association, which is responsible for looking after the welfare of the rank and file and their families.

And their twin daughters are responsible for providing Gen Prayuth with information and updates on modern trends in society.

Gen Prayuth lives a simple life and his favourite dish is khai naam (Thai-style omelette in clear soup), the source said, adding that Gen Prayuth loves riding motorcycles and has been a keen chopper hobbyist since he was an army captain.

Now with many responsibilities and burdens, he has little time to pursue his hobby, although he still finds time to ride a motorcycle at night inside the compound of the 1st Infantry Regiment on Vibhavadi Rangsit Road, where his military residence is located, the source said.

When he takes office as prime minister, Gen Prayuth is expected to continue living in his home at the military unit. Gen Prayuth designed the home himself. Construction was finished just two years ago, the source said.

The home is well-equipped for satellite teleconferences and can serve as his war room, the source said.

Meanwhile, the military is arranging for the army headquarters on Ratchadamnoen Avenue to be the venue where Gen Prayuth receives the royal command appointing him as prime minister.

An army source said Gen Prayuth decided he will receive the royal command at the army headquarters instead of Government House, even though Government House has already been renovated and is ready to accommodate the new prime minister.

He received a royal command making him head of the National Council for Peace and Order (NCPO) at army headquarters on May 26.

During this period, Gen Prayuth has to prove he can measure up to the task of juggling three important roles simultaneously — as the NCPO head, the army chief and the prime minister.