General Prayuth Chan-ocha was officially appointed Thailand's 29th prime minister when he received the royal command in a brief ceremony at army headquarters on Monday. 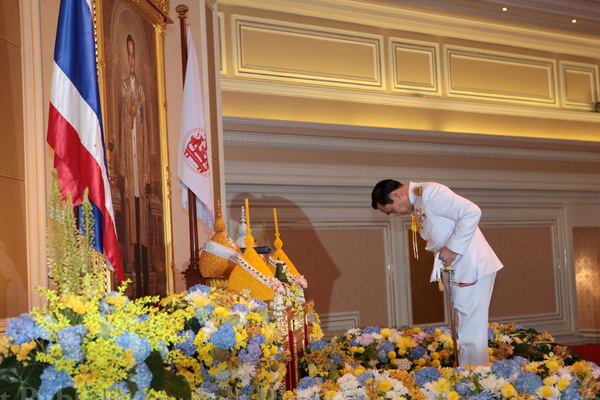 Gen Prayuth is the first serving military officer to become prime minister in 22 years, when the Black May revolution of 1992 overthrew then-premier and Gen Suchinda Krapayoon. (Photo by Chanat Katanyu)

Gen Prayuth, now commander of the army, head of the National Council for Peace and Order (NCPO) and prime minister, said Sunday he was ready for the job.

In a break from tradition, Gen Prayuth received the royal command at a ceremony at Army Headquarters. Civilians who take on the job normally receive the command at Government House.

The ceremony, which took place around 10.30am, was also attended by NCPO secretary-general Gen Udomdet Sitabutr who then led key army leaders to congratulate the new premier.

They pledged support to the Prayuth government.

Gen Prayuth is the first serving military officer to be prime minister since then-Gen Suchinda Krapayoon, who took office April 7, 1992. Gen Suchinda's term ended badly after only 47 days in office, when the Black May uprising threw him out and re-installed a democratic regime.

He is the first coup leader to serve as prime minister since Sarit Thanarat in 1957.

During his four-year tenure as army chief, Gen Prayuth has appointed many reliable military men to key positions, observers say.

Later this week Gen Prayuth is expected to ask His Majesty the King to grant royal endorsement to his new cabinet.

Gen Prayuth is likely to take the post of defence minister, the source added.

Observers remain uncertain about whether Gen Prayuth then will resign as the army chief.

Gen Prayuth is set to retire from the army on Sept 30. Some believe he may appoint Gen Udomdet as acting army chief.

Gen Udomdet, who is currently also a deputy army chief, is a close aide of Gen Prayuth and has long been expected to succeed him.

Meanwhile, Privy Council president Prem Tinsulanonda has decided to forgo his usual meeting with senior military leaders to mark his birthday this year.

They normally pay their respects at his Si Sao Thewes residence.