Officers make up 11 of 32 executive members

The Prayuth Chan-ocha cabinet, which came into effect yesterday, is dominated by military officers with the strong support of bureaucrats and technocrats.

Of 32 ministerial members taking up 34 positions, 11 of them are military officers who dominate core ministries such as Transport, Commerce, Interior, Education, Foreign Affairs, Defence and Justice.

However, the National Council for Peace and Order (NCPO) is aware that experienced hands may be needed in the economics portfolio, and is prepared to ask the military to step aside in these cases. 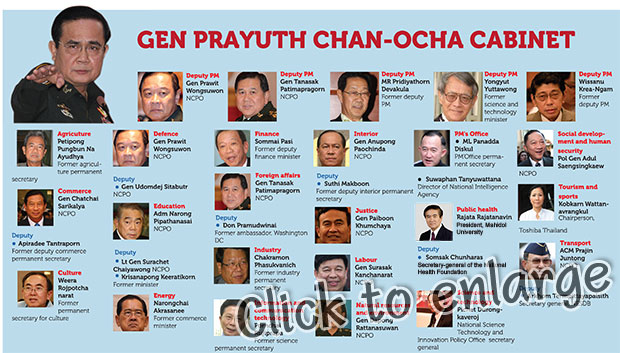 In several ministries where military officers take the helm, senior civil servants and technocrats are appointed as deputy ministers to help them.

Wuthisarn Tanchai, King Prajadhipok’s Institute deputy secretary-general, said deputies would be able to help ministers drawn from the military in the event they are stumped by an issue.

For example, ACM Prajin Juntong is appointed transport minister while Arkhom Termpittayapaisith, former secretary-general of the National Economic and Social Development Board, is deputy minister. “However, no matter who is minister, the direction of the cabinet will be controlled by the NCPO,” he said.

In the military ministerial area, some hold posts in the cabinet, the NCPO and the army, such as assistant army chief Gen Chatchai Sarikalya who is named commerce minister.

Gen Chatchai, who is deputy chief of the NCPO’s economic affairs, is expected to be made deputy army chief in the annual reshuffle.

It is believed some cabinet posts have been offered as awards for officers expected to miss key posts in the upcoming military reshuffle.

Gen Paiboon Khumchaya is named justice minister. The cabinet post is seen as a consolation prize for the fact he will not be promoted as army chief.

Gen Paiboon, head of the NCPO’s legal and justice affairs, is expected to be transferred out of the army. He will be appointed deputy permanent secretary for defence.

Deputy army chief Gen Udomdej Sitabutr is expected to be named army chief. Gen Udomdej will serve also as a deputy defence minister, which comes as a surprising move. This expected promotion will grant even more power to Gen Udomdej.

Gen Prayuth’s close friend Gen Dapong Rattanasuwan, a retired deputy army chief, is also likely to be disappointed as he is appointed to take control of the Natural Resources and Environment, regarded as a B-grade ministry.

Lt Gen Surachet Chaiyawong, the army’s deputy chief-of-staff, is named deputy education minister. Lt Gen Surachet, seen as a close aide to Gen Udomdej, is likely to be made the army’s special advisor in the military reshuffle.

Gen Prayuth wanted Gen Surachet to leave the army because he had conflicts with Third Army chief Lt Gen Preecha Chan-ocha, who is Gen Prayuth’s younger brother and expected to become assistant army chief in the coming reshuffle.

Gen Prayuth is expected to take his cabinet ministers to attend a swearing-in ceremony before His Majesty the King at Siriraj Hospital tomorrow.

Some critics see the military-dominated cabinet as a step to consolidate the junta’s power. Half of the National Legislative Assembly, the country’s legislature, is made up of military officers and police or those who have close ties with the military.

During his weekly televised address on Friday night, Gen Prayuth said the security situation has not been fully settled so he needs his fellow officers whom he trusts to help him run the country. A source said Gen Prayuth prepared the Cabinet line-up on his own.

Former deputy prime minister and key Pheu Thai figure Pongthep Thepkanchana said the image of the new cabinet under Gen Prayuth was not as important as its policy. He urged Gen Prayuth to deliver a policy statement to the NLA so people will know where the country is heading next.