A blaze at a vast rubbish dump home to six million tonnes of putrefying trash and toxic effluent has kindled fears that poor planning and lax law enforcement are tipping Thailand towards a waste crisis. 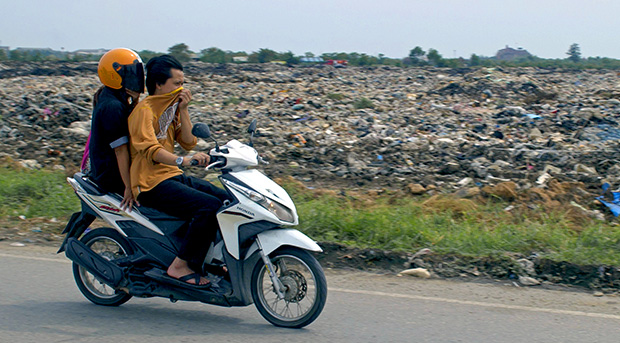 This photo taken on April 29 shows Thai villagers covering their noses while riding a motorcycle past a vast rubbish dump in the Praeksa district on the outskirts of Bangkok. A blaze at this vast rubbish dump — home to six million tonnes of putrefying trash and toxic effluent — has kindled fears that poor planning and lax law enforcement are tipping Thailand towards a waste crisis. (AFP photo)

Locals had long pressed for the closure of the foul-smelling Praeksa landfill site, which is wedged between a cluster of industrial estates on the fringes of Bangkok. But a ferocious eight-day fire that cloaked the eastern suburbs of the capital in poisonous smoke earlier this year thrust Praeksa to the heart of a national debate over rubbish.

Bangkok produces around 10,000 tonnes of waste a day, a substantial portion of the 27 million tonnes generated each year across the kingdom. The ruling military regime has put waste disposal high on its to-do list, recognising that poorly regulated pits are filling quickly and prone to disaster.

Experts warn that dumps are time bombs for the environment and the increasing number of communities forced to live cheek-by-jowl with them.

Open dumping "offers a quick and easy solution in the short run," the United Nations Economic and Social Commission for Asia and Pacific said in a study, warning of severe environmental problems and long-term health issues caused by contaminated water and land.

Of Thailand's 2,500 open rubbish pits, just a fifth are properly managed, according to the kingdom's Pollution Control Department. The rest are at the mercy of illegal dumping - including of hazardous waste - fires and seepage into nearby land and water systems. 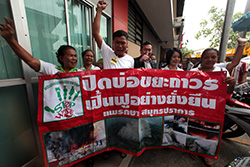 A network of anti-Praeksa garbage dump files a petition to National Council for Peace and Order in July, urging the illegal dump to be closed down.

The department said the mid-March blaze at Praeksa, which has caught fire several times since, was just one of 10 raging every month at dumps across a kingdom.

A lack of enforcement is to blame, said Nicha Rakpanichmanee of Ecological Alert and Recovery Thailand, explaining the whole waste-disposal chain is skewed towards "anyone who can pay."

She says that 1.9 million tonnes of toxic waste goes unaccounted for after leaving factory gates every year, with many factory owners flouting laws to save on the costs of safe disposal and tip operators willing to turn a blind eye to the illegal dumping of toxic run-off.

"The people who will remain with the problems are the poorest who cannot move," she says of the communities forced to live with contaminated water and land.

For residents near Praeska, in Samut Prakan province, the intensity of the blaze has left them in little doubt that flammable chemicals swash around the fetid mounds of trash. The landfill, however, is meant for household waste only.

The dump operator denied he had allowed chemicals to be illegally stashed at his site. "But there were several companies operating the pit before me," dump operator Krompol Samutsakorn told AFP.

"I want it closed," said 85-year-old local resident Jad Pimsorn. "I have lived with it, but I don't want my children and grandchildren to live with it too." 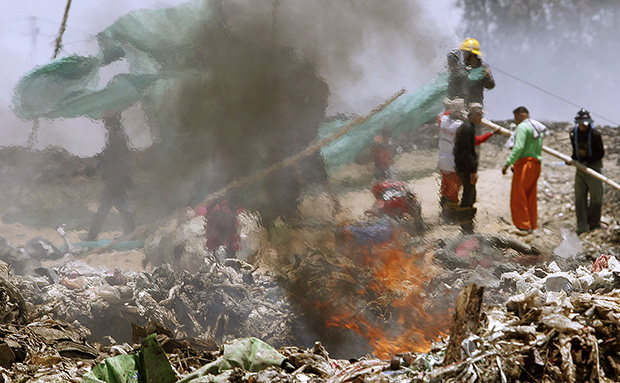 Firefighters standing on mounds of rubbish direct a jet of water at the seat of the fire at the burning landfill site in tambon Praeksa Mai, Samut Prakan, on April 9. The fire burned for 10 days.

Until the Praeksa blaze, talking about trash was a conversation few wanted to have.

Currently, Thai households pay less 16 baht a month to get rid of their waste. Local authorities say that leaves them short of cash to invest in modern, environmentally friendly incinerators or recycling plants, but they are reluctant to raise rates on would-be voters in already poor neighbourhoods.

That could be about to change, with military ruler Gen Prayut Chan-O-Cha vowing to tackle the kingdom's garbage problems.

"Can people throw away garbage in outer space?" he asked in his weekly television address Aug 8. "They cannot... they have to throw it away in Thailand." 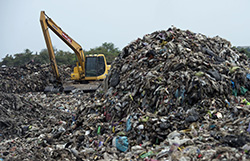 Thai workers remove rubbish with heavy machinery at a vast rubbish dump in the Praeksa district on the outskirts of Bangkok. (AFP photo)

The comments from the can-do army chief and prime minister have raised hopes of a policy revival towards waste after years of short-term planning - abetted by short-lived governments - in the politically turbulent kingdom.

One solution is better facilities to compost organic waste - especially in places such as Thailand where nearly half of the daily 1.1 kilogrammes of household waste produced per person is bio-degradable.

As they heave a wheelie-bin full of rotting food and broken beer bottles into the back of a rubbish truck, a group of Bangkok garbage collectors say Thais must change their habits or live with the consequences.

"It is hard to solve the problem," said bin-man Wutthichai Namuangrak, seemingly inured to the sickly-sweet stench rising from the back of the truck. "We can help by collecting the trash, but people cannot just rely on us."