The Office of the Auditor-General (OAG) is launching a full investigation into the case involving the procurement of high-priced microphones for Government House, an OAG source says.

The source told the Bangkok Post Wednesday that OAG officials had already examined evidence at agencies involved in the project to procure and install electronic equipment for meeting rooms at Government House. 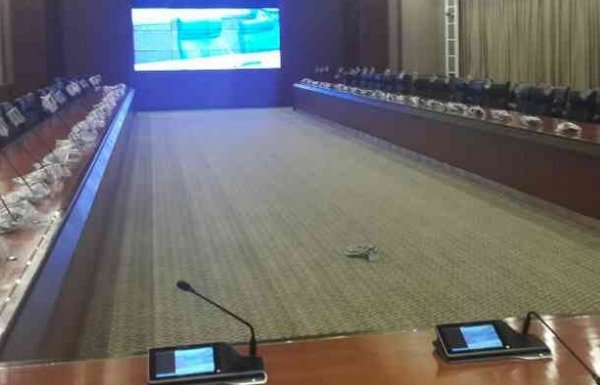 The microphones all have been installed at Government House, and are shown here in their original plastic wrap.

The agencies include the Secretariat of the Prime Minister, the Department of Public Works and Town and Country Planning, a committee overseeing the median prices, and those who approved payments for equipment, the source said, adding that other agencies later found to be involved in the project will also be investigated by the OAG.

The move came despite the fact that the Department of Public Works and Town and Country Planning claimed Wednesday that a supplier had agreed to reduce the cost of the controversial microphones for a conference room at Government House from 145,000 baht each to 94,250 baht after an outcry last week.

However, according to the website www.boschconference.starin.biz, the microphone model DCNM-MMD, the same one as that proposed for Government House, was quoted at US$1,735, around 55,000 baht.

The source said the OAG is gathering evidence relating to the procurement process and delivery of the equipment.

The source said the first target for the inquiry is the committee responsible for taking delivery of the equipment and those who approved payments.

(In a related development, the OAG has also decided to prosecute 11 civil servants from parliament over the purchase last year of more than 200 digital clocks for 14.8 million baht, far above their value.)

Monthon Sudprasert, director-general of the Public Works and Town and Country Planning Department, held a press conference Wednesday to counter claims of overpriced equipment being procured and a "special procurement method" being used to to renovate the Bancharkarn 1 building and Banchakarn 2 building at Government House.

Also present at the press conference were Charnchai Tantirat, the project director of Asavasopon Co, which is contracted to install the equipment at meeting rooms at Government House, and Wachirapan Pattaramongkolrit, the managing director of Patararungroj Partnership Limited, the dealer of the microphones and meeting room equipment.

Mr Monthon insisted that the procurement did not use "a special method" as claimed. Instead, the PM's Office's regulations relating to office procurement have been exempted for the project, he said, adding that he has signed to approve the procurement.

But he said the median price for the procurement of equipment had been revealed on the department's website in order to show transparency.

The price is only an estimated price quoted for seeking a budget and the final price has not yet been agreed upon, Mr Monthon added.

He said the department will negotiate for the lowest possible price within the next few days.

Many of the details and pertinent paperwork can be found at the procurement section of the website of the Department of Public Works and Town & Country Planning. (Website and all pertinent documents are in Thai.)

Mr Monthon said he will not allow anyone to steal state money, although businessmen can seek reasonable profit.

The company has installed the equipment first and paid up-front, and the price has not yet been concluded, he said.

Regarding the allegedly overpriced microphones, Mr Monthon explained that the installation of equipment in Room 501 at the Bancharkarn 1 building must be complete by the end of this month; therefore, a contractor with experience is needed to install modern and efficient equipment.

The department has decided to choose Asavasopon which meets the requirements. The company used microphones model DCNM-MMD by Bosch Security Systems, imported by Bosch Thailand with Patararungroj as the dealer.

Mr Monthon said the microphone model was used at several world conferences, including a summit on nuclear energy in the Netherlands, although it has never been used by state agencies in Thailand.

Mr Monthon said earlier that the contractor Asavasopon Co had said the equipment was subjected to import tax and a customs levy and that the department requested the tax documents for checking.

He also said he is negotiating for a 300,000-baht price for a 60-inch television screen.

According to the department's website, the department is considering installing a VDO wall system in each meeting room with a 60-inch plasma panel C60pw120 priced at 529,870 baht each.

Checks have found that the plasma panels belong to LG and the model was no longer being marketed because the panels used old technology, with a resolution of only 1,365 x 768 pixels. Other LG models available on the market are 65 inch and sell at only 70,900 baht each. 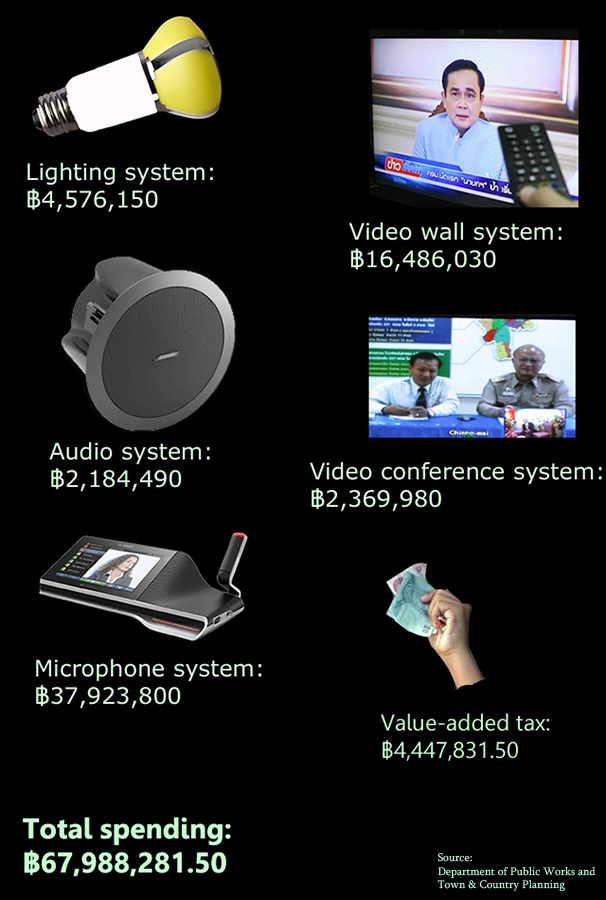 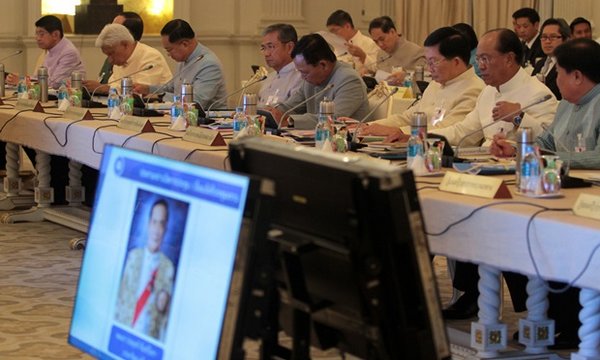 The cabinet and high-ranking government officials have already begun using the new sound system, which seems to indicate there are no plans to reject or return it.