An earlier Department of Special Investigation probe into the five people arrested last week for their alleged role in the 2010 protest violence was sidelined by "political interference", a source at the agency has claimed. 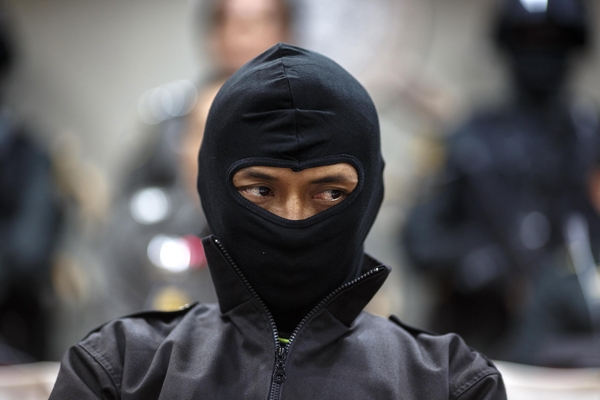 A man who was arrested by police for his suspected involvement in the bloody clashes in 2010 between the army and red-shirted protesters is seen during a news conference at the headquarters of the Royal Thai Police on Thursday. (Reuters photo)

It comes amid mounting criticism of the police handling of the arrests, with rights groups labelling a press conference in which the suspects were forced to dress in black paramilitary attire as a publicity stunt likely to rob them of the chance of a fair trial.

The DSI source said the agency has files on all of the alleged "men in black", but the probe ground to a halt when the Yingluck Shinawatra government was elected in July 2011.

A "powerful politician" in the since-deposed government laid out a guideline for the DSI that the so-called men in black did not exist and there was no armed element, the source alleged.

The source also claimed the DSI investigators probing the case were replaced.

DSI director-general Chatchawal Suksomjit said the agency would ask to take over the case because it is currently responsible for handling cases involving the 2010 political violence.

An activist group called People's Information Centre on the April-May 2010 Crackdown Impact (PIC) has issued a statement urging the public "not to be misled" by the arrests.

It acknowledged the appearance of "men in black" on April 10, 2010, but said there was no compelling evidence linking them to the nine deaths on Din So Road in the evening of that day.

Three of the four military casualties, which included Gen Romklao Thuvatham, a colonel and deputy chief-of-staff of the 2nd Infantry Division at the time, on Din So Road were as a result of grenade blasts, according to the findings of an inquest, not from gun fire as claimed by police on Thursday.

"The public must not be lured into the false conclusion that the men in black were responsible for all of the deaths on that night," the group said.

It also said Mr Kittisak, one of the suspect, was mentioned in a Human Rights Watch report released on Tuesday that he had been detained by soldiers in Bangkok since Sept 5, nearly a week before he was presented at the police press conference on Thursday. A warrant for his arrest was issued on Sept 10.

Sunai Phasuk, a Human Rights Watch representative in Thailand, told the Bangkok Post Sunday that the police presentation of the five suspects have misled the public into believing they were guilty.

"Whether they are the perpetrators or not should be proved in the court, not in an orchestrated manner that pre-empts the court procedures," Mr Sunai said.

He noted that at least three of the suspects were taken away and detained secretly and without charge by the military before Thursday's press conference.

Ms Kritsuda, who is currently living in exile after that she had been tortured while in military custody following the May 22 coup, posted a video clip yesterday to defend herself against the accusations.

"I would like to tell Pol Gen Somyot that in 2010 I was very young," she said, referring to deputy police chief Pol Gen Somyot Phumpanmuang, who will become national police chief on Oct 1. Ms Kritsuda was 23 at the time of the 2010 political violence. "How can you accuse me without feeling ashamed of yourself?"

Police said they tracked the suspects after following Mr Kittisak. Soldiers "remembered him" from when he and the others allegedly rode in a van past an army Humvee on April 11, 2010.  A subsequent investigation put police on the trail of the other suspects, they said.