The chairman of the National Council for Peace and Order (NCPO) has announced the new structure of the NCPO, now with 15 members from six earlier including two civilians. 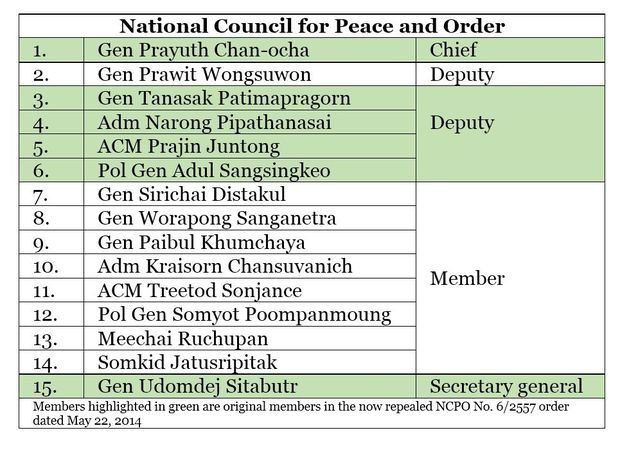 According to the its announcement No. 122/2557 published in the Royal Gazette on Tuesday, Meechai Ruchupan and Somkid Jatusripitak are now NCPO members.

The edict replaced the 6/2557 announcement on the six-member NCPO the day the coup was staged.

Previously adviser to the NCPO, Mr Somkid was former deputy prime minister in the Thaksin Shinawatra cabinet. He later fell out with Thaksin after the 2006 coup.

Mr Somkid was one of the politicians banned from politics for five years as he was one of the executives of the now-defunct Thai Rak Thai party, which was dissolved by a court order in 2009.

After the coup this year, Mr Somkid was touted to hold key positions in the cabinet and new bodies. The 2014 interim charter, however, disqualifies anyone who has been banned from politics from joining the bodies set up by the junta.

A well-known legal expert, Mr Meechai is a former deputy PM in the Anand Panyarachun government and multiple-time parliament speaker. He was instrumental in pushing the 1997 Constitution, the most democratic charter Thailand has ever had. But after the 2006 coup, he helped the military draft orders, laws and the 2007 constitution along with Wissanu Krea-ngam and Borwornsak Uwanno.

Other new NCPO members are the prospective chiefs of the three armed forces, Supreme Command and National Police, slated to take office on Oct 1.

Also joining the NCPO was Gen Prawit Wongsuwon, the Big Brother of the Burapa Payak wing of the army to which Gen Prayuth belongs. Gen Prawit is also a deputy prime minister, defence minister, and NCPO's chief adviser.