Prime Minister Prayut Chan-o-cha has apologised for an offhand remark that equated unattractiveness with safety for bikini-wearing tourists, a comment that sparked international outrage following the murder of a young British couple on Koh Tao. 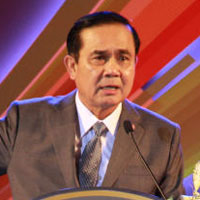 The flippant comment, made to reporters on Wednesday, prompted screaming headlines across the United Kingdom, accusing the Thai premier of "smearing" the memories and reputation of Britons David Miller and Hannah Witheridge, who were bludgeoned to death early Monday on a secluded beach on the Surat Thani province island.

Internet users also erupted with accusations of sexism and misogyny by the conservative 60-year-old general's comments, which insinuated unattractive women wearing bikinis would face no danger from predators.

Gen Prayut said he apologised for the discomfort caused by the comment. He insisted he did not mean to insult or blame anyone, but only remind foreign visitors to exercise caution at certain places and times.

"How could I insult or blame them?" the general said. "I confirm Thailand is still safe today, but bad people also exist, just like everywhere else in the world. Therefore, one must be cautious.

"The safety level in our country and [tourists'] home countries is probably unequal and I'm concerned about this," he added.

The prime minister will raise the subject again in his weekly Returning Happiness to the People television broadcast on Friday.

Despite the apology, the comments, made while addressing the investigation into the Koh Tao murders, are still being discussed online.

He was quoted by foreign news agencies as saying: "There are always problems with tourist safety. They think our country is beautiful and is safe so they can do whatever they want, they can wear bikinis and walk everywhere."

But "can they be safe in bikinis ... unless they are not beautiful?"

The British embassy in Bangkok told AFP it had contacted the Thai foreign ministry raising its "concerns" over his remarks and to ask "for clarification", according to an embassy statement.

Government deputy spokesman Col Sansern Kaewkamnerd earlier said the government had clarified the matter with officials at the embassy. He said Gen Prayut insisted that the remarks were not meant to blame or defame anyone and said the general public should take into consideration the context of what he said.