The National Council for Peace and Order (NCPO) is expected to rush the selection the 250 members of the National Reform Council (NRC) from the final list of candidates on Friday, amid concerns over possible cronyism. 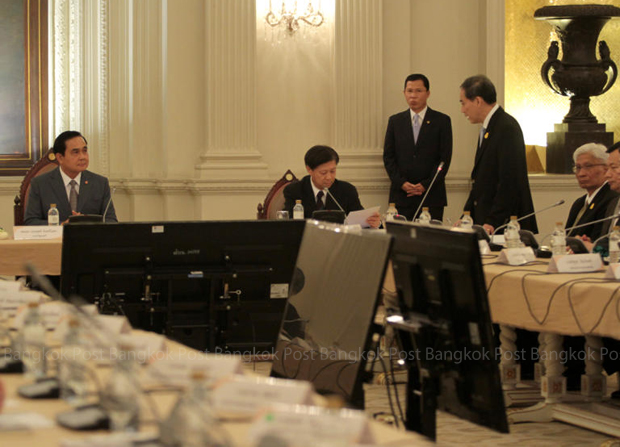 Prime Minister Gen Prayut Chan-o-cha chairs a meeting with senior officials at Government House on Thursday. He has called a meeting of the National Council for Peace and Order on Friday to select the 250 members of the National Reform Council. (Photo by Chanat Katanyu)

The 15-member NCPO has until Oct 2 to appoint the 250 members from more than 7,000 nominated candidates for seats on the reform panel.

Prime Minister and NCPO chairman Prayut Chan-o-cha said on Thursday the final selection process will start on Friday and said he would also try to wrap up the selection on Friday, to allow more time to prepare the forwarding of the list to His Majesty the King for royal approval.

The 250-seat reform panel will be selected from candidates in two categories - 77 members representing each of the provinces, and 173 members drawn from 11 specialised areas.

The NRC is a major component of the NCPO's roadmap toward comprehensive reforms before a general elections is held.

Political watchers have raised allegations of cronyism, claiming that the panels screening candidates in some provinces selected their own favoured people. The governors of each province chaired the screening panels that each proposed five candidates for the NCPO to choose from.

National Legislative Assembly member Somchai Sawangkarn said Surin, Tak, Phatthalung, Phangnga and Chachoengsao were among provinces where complaints made to him about the transparency of the selection process had come from.

Gen Prayut on Thursday denied allegations that the names of candidates for the NRC were pre-selected ''I have no idea how I could do that, and for what purpose?" he told reporters at Government House.

Air force chief and deputy NCPO chairman ACM Prajin Juntong said on the sidelines of an Asean  air chiefs conference in Nay Pyi Taw, Myanmar, that candidates who miss out on selection on Friday could be used in other roles.

They could be sit in other forums to be set up to offer advice on reforms, he added.