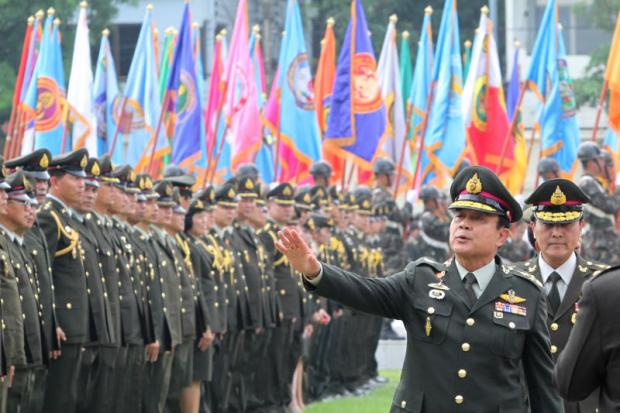 Gen Prayut and his fellow retirees yesterday visited Gen Prem, also a former prime minister, at his Si Sao Thewes residence, where Gen Prem gave them his blessing and thanked them for a job well done.

A source said Gen Prem thanked Gen Prayut and the retiring armed forces chiefs for playing key roles in solving the country's problems over the past months.

People have put their faith and hope in the army to help solve their problems, he said.

Gen Udomdej made his promise in a ceremony at the Royal Thai Army headquarters in Bangkok where Gen Prayut, the retiring army chief, handed the position over to him. Gen Prayut steps down as army chief but will stay on as prime minister.

Gen Udomdej said he would protect the monarchy and would not tolerate any offence against it. He believes all Thais support his stance. He also vowed to protect national sovereignty and prevent conflicts with neighbouring countries.

The new army chief also promised to protect the government of Gen Prayut and continue his predecessor's policies.

"I am ready to have the army maintain order and I confirm there will not be another coup because I have complete control. The army stands firmly behind the government and the National Council for Peace and Order."

"The army and the government will work together until the NCPO blueprint for the country is completed," he said.

Gen Udomdej promised to work on tackling the ongoing problems in the far South.

He said he would focus on creating peace instead of conquering villages.

He said he would also talk to groups with differing political stances to prevent unrest and would strengthen the army's ties with the people so the public could always depend on it.